Gastro glacier: visiting the Wein am Berg festival in Austria

Helena Lang samples the three-night Wein am Berg festival, run by the Das Central hotel in the Austrian ski resort of Sölden... 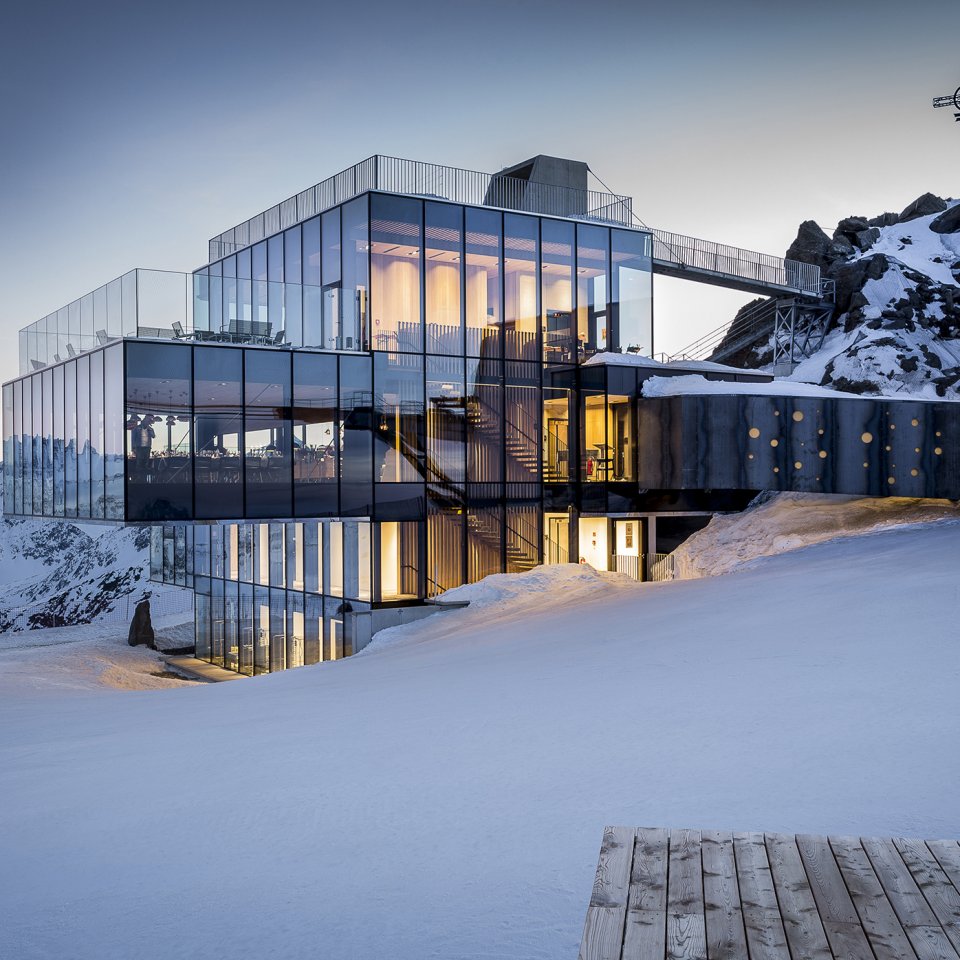 It’s quite the James Bond moment; standing on the terrace of a chic restaurant called ice Q. It’s like a large, magical, mirrored box, 3,000 metres above sea level on top of the Gaislachkogl glacier. Unlike Bond I’m not sipping a Martini, but a glass of white wine called Pino 3000, so-named because it’s matured up here, in oak barrels and therefore must be one of the world’s most unique wines. And if you’re unsure about the James Bond connection, it’s here that Daniel Craig kicked off the spectacular pursuit through the snow in Spectre. 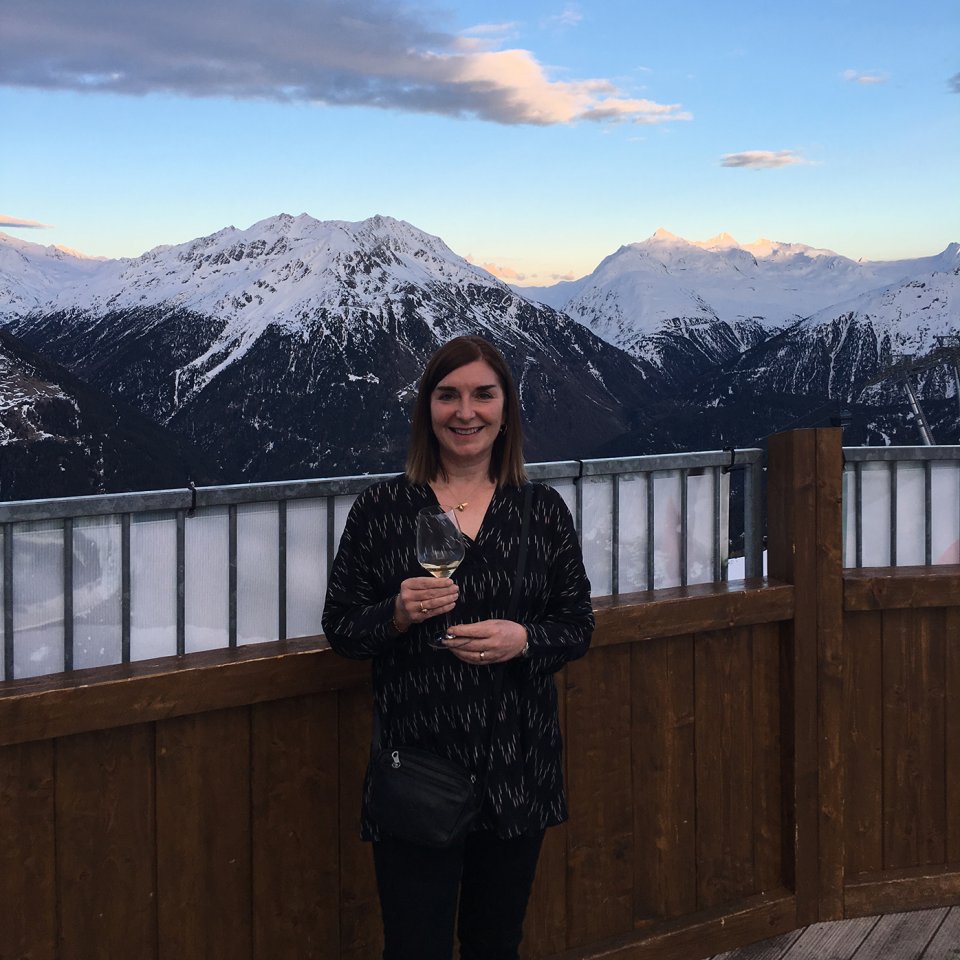 And that’s not where the glamour ends. I’m here to sample the three-night Wein am Berg festival, run by the team at the beautiful Das Central hotel in the Austrian ski resort of Sölden. The party started the minute we wheeled our cases through customs at Innsbruck airport (the hotel sends sleek chauffeur-driven black BMW saloons to collect guests) and it continues at check-in when the friendly reception team, all dressed in beribboned Tyrol gear manages to make the usually grim process fun, with tipples and nibbles on hand.

The festival combines Michelin starred- chef menus, glorious wine-tastings and top-quality skiing with non-stop socialising, hours spent in the hotel’s spectacular spa and a general atmosphere of bonhomie. It’s clear from the start that many of the guests are repeat visitors – we chat to a group of Germans who have been coming to the hotel for many years. They embrace Angelika Falkner, who owns and runs the hotel with her family, like she’s a long-lost friend.

Our first evening kicks off with a wine-tasting reception where we sample crisp Rieslings from small estates in Burgenland and waiters twirl past with trays of canapés, such as delicate pieces of perch wrapped in Swiss chard, and tartlets filled with mountain cheese and smoked meat. Once the atmosphere has reached peak party, we sit down to a four-course dinner from the hotel’s highly regarded chef, Michael Kofler. 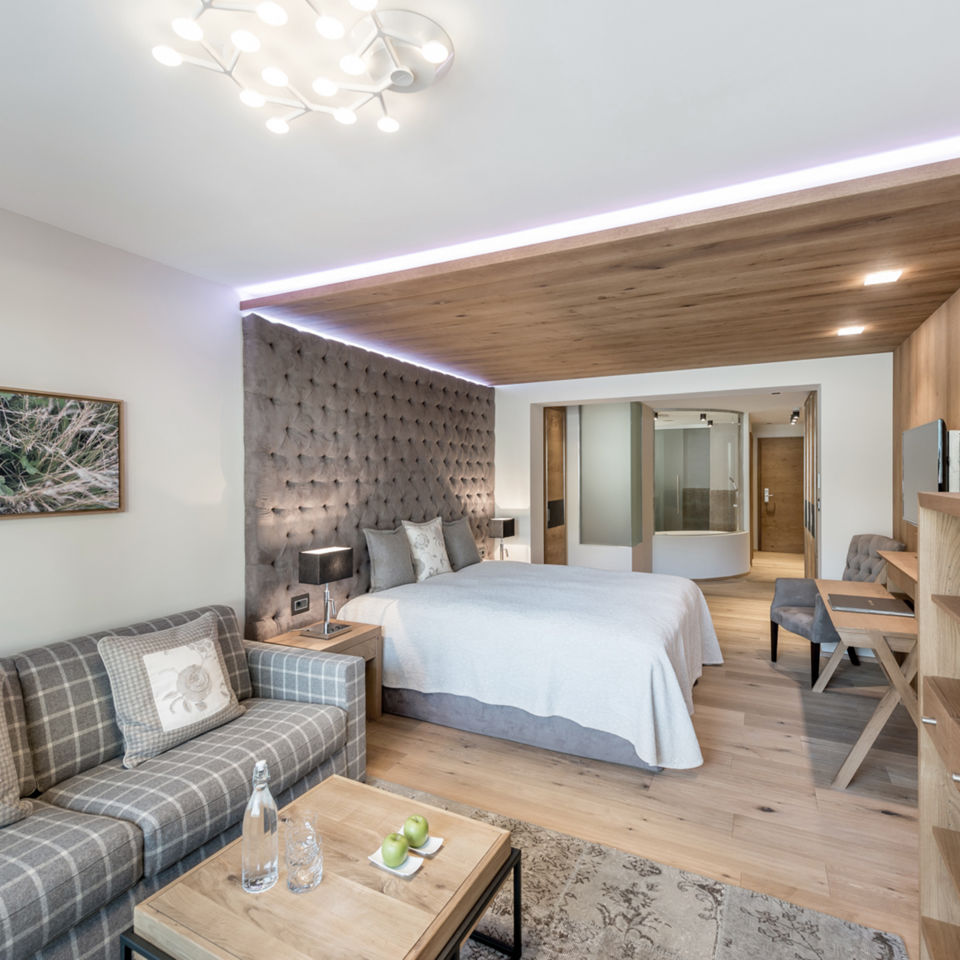 One of the ‘cosy’ bedrooms

Accompanied by rousing oompah tunes from the table-hopping musicians, we tuck into prawns and asparagus with wild garlic, followed by rabbit terrine. Then there’s a delicious black pudding dish with ribbons of a fungus called krause glucke, before a main course of veal. Pudding is a white yogurt globe which, when smashed, reveals a gooey rhubarb and strawberry cake. Those with big appetites can browse the cheese buffet, sampling locally produced treasures, some wrapped in leaves, others coated in ash.

For skiers, the sporty fun starts the following morning when you’re taken to the Rettenbach glacier for lessons with some of Europe’s top instructors. Non- skiers can visit Venezia, the hotel’s fabulous (and slightly eccentric) spa where you’re transported to the excesses of the Italian Renaissance via a three-floor water world of pools, saunas, steam rooms and lounges. However one spent the morning, we all meet for more wine-tasting before a buffet lunch at one of the ski-slope restaurants. There’s plenty of laughter, clinking of glasses and crunching of ski boots.

In the evening, the excitement is palpable as the fleet of BMWs zoom us to the ski gondola for our trip up to ice Q for hors d’oeuvres and accompanying wines. The vineyard reps and owners are passionate about their individual blends and we enjoy earmarking our favourites. Back at the hotel, dinner is served. This time a buffet of dishes cooked by several European Michelin-starred chefs and their teams. 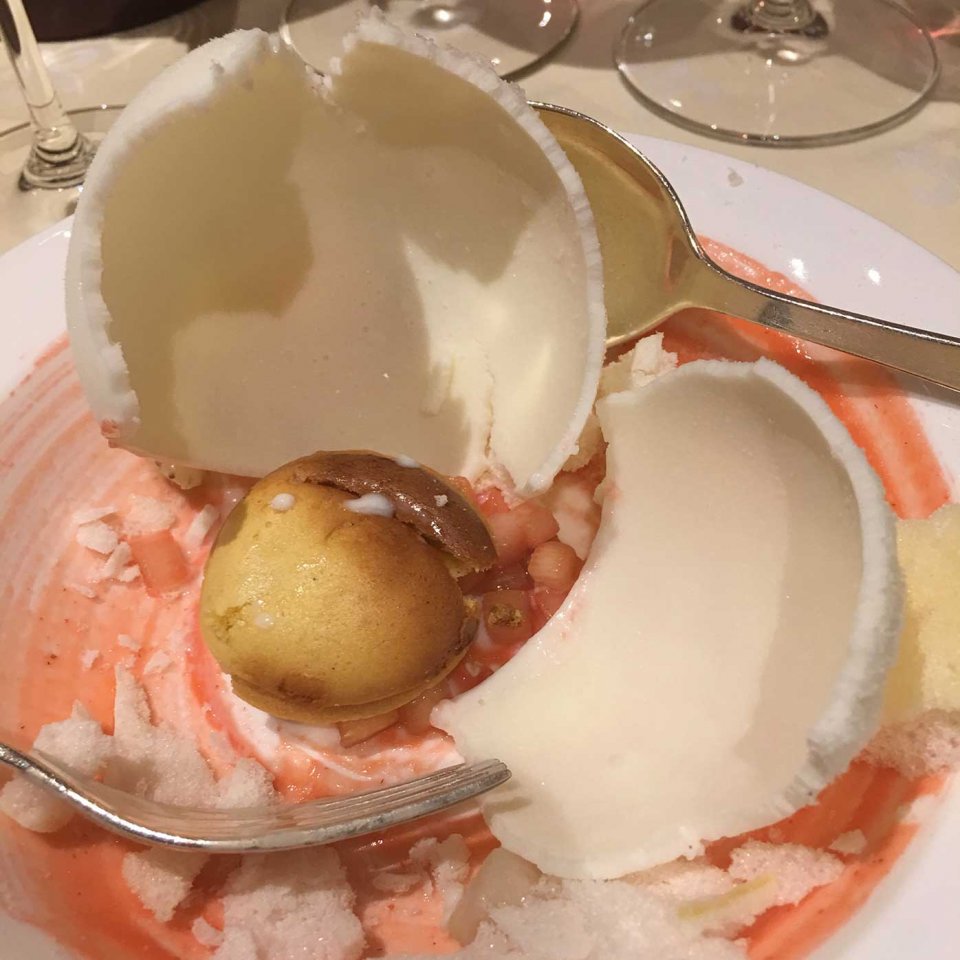 For all of us, the festival ends with the Big Bottle Party up at the Giggijoch mountain restaurant. We spent several hours in the bar where the live band got everyone on the dance floor before we all gathered on the terrace. Gazing out into the darkness we witnessed the most fantastic fireworks display, a fitting finale to the fun. We shrieked and cheered as we toasted the chefs and the ski instructors, and slightly rosy-cheeked from the cold air and fine wine, we made the descent back to our cosy beds. I’m not sure what Bond would have made of it all, but this guest was left not shaken, but stirred.

The 2020 Wein am Berg package starts from €1,726 per person in a double room at Das Central including a three-day Wein am Berg programme and a two-day ski pass. Visit central-soelden.com.