We cook the books - My Paris Kitchen: Recipes and Stories

My Paris Kitchen: Recipes And Stories features the best of Parisian dining alongside anecdotes from David's time in France. The photographs in the book are so beautiful they sell the Parisian lifestyle just as much as the food. Be prepared to start Googling 'how + much + house + Paris' by page 7.

Our editorial assistant Lydia impressed us all when she tackled one of the harder recipes from David's book: 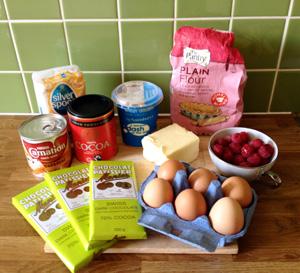 Despite the fact I had completely over-indulged in chocolate before we'd even made it to Easter Sunday, I decided to make the dulce de leche chocolate tart. The ingredients list seemed slightly extensive and specific (I had to ask Google what kosher salt was) and the measurements were in a combination of ounces, grams and cups, which was a bit confusing.

David suggests making your own dulce de leche from scratch but I opted for the ready-made version (which is less exotically labeled 'caramel') – it was much less time consuming but equally indulgent.

The method was quite complex and involved using a lot of equipment. I made the tart base in a food processor like David suggests, but had a bit of trouble getting the dough to form. Eventually, with some patience (and a drop or two of water!), it finally formed into a rich, chocolaty dough, which I chilled before blind baking.

Making the chocolate filling involved cooking up a custard mix with chocolate, milk and egg yolks. This was the only other tricky part of the recipe; the rest was fairly straightforward.

I think I may have got slightly carried away with the caramel as when it was in the oven it bubbled up over the chocolate in places. It came out looking more or less like the picture in the book, only a little more 'homemade'. Once the tart had cooled, I served it with whipped cream and fresh raspberries.

The end result was delicious. The bitterness of the dark chocolate was counteracted by the sweet dulce de leche and the base was perfect. The tart went down a storm with my family after our Easter roast, but, despite being a crowd pleaser, I do think that the method could have been simpler.