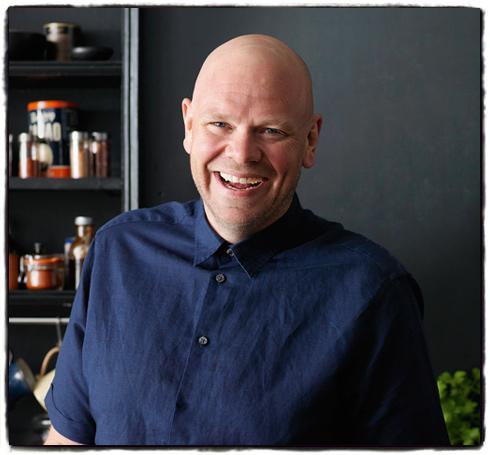 Putting the happiest chef in the world on TV in January is a fantastic idea; we all need cheering up after heading back to work, with heavy tummies and heavy hearts. King of the gastropub Tom Kerridge hosts the new series of Food & Drink on BBC2 – so we caught up with him to talk about mutton, rotisserie and Liam Gallagher...

There's this mutton chop dish on Food & Drink – it's a nod to something that we remember as kids. We've covered them in breadcrumbs, so texturely they're amazing. It's a good way of cooking mutton rather than always assuming it's going in a stew. We're trying to reinvent the use of mutton I suppose. They're full on flavour – like lamb, but extra, which is probably the best way of describing it.

I think a big trend over the next couple of years will be people growing a lot more of their own stuff. Whether it's window boxes, or having a massive garden, people are utilising space.

'There'd be no point in just growing four carrots.'

With window boxes you can do very simple things. There'd obviously be no point in just growing four carrots (that would be the ultimate decadent Sunday lunch), but you could look at doing something like borage flowers or something that adds a little something to a dish.

'New ingredients are always hard to come by.'

It's new techniques that I look for. I've been experimenting with rotisserie. My new pub has a huge rotisserie, which is great for slow roasting. It's definitely something that people can do at home - you don't need a rotisserie. For me a rotisserie is one of the most basic ways of cooking; it's fire, it's a piece of meat, vegetables, or a whole fish or something like that. Easy.

'Paul Ainsworth is beginning to really find his feet.'

There are two or three chefs that have been fantastic this year. They've been on the scene for a while but they're beginning to move onto the next level. One is a guy called Russell Batemen, he's head chef at a place called Colette's, at the Grove Hotel, north London.

There's also Paul Ainsworth, from Number 6 restaurant in Padstow. He's been there for a while, but in terms of up and coming I think he's beginning to really find his feet.

Peter and Jonray Sanchez-Iglesias are two brothers who are cooking at Casa Mia in Bristol, they're amazing too. Those three restaurants and those three guys are definitely ones to look forward to.
A must-do on my list for this year is my mate Sat Bains' restaurant in Nottingham.

'I consider myself quite a personable guy, but I thought, what a lovely bloke.'

I'm a massive music fan, so Liam Gallagher would probably be quite a cool one to have at a dinner party; unpredictable but quite good fun. Food wise, maybe the Roux brothers. The original Albert and Michel Roux Senior. So that's food and music, and the other one to do would be football. This guy's eaten here a few times (I'm not a West Ham fan) – Andy Carroll. I can't tell you what an amazing, fantastic, eloquent and brilliant guy he was. I consider myself quite a personable guy, but I thought, what a lovely bloke.

'She was my best mate and trusty sidekick.'

Our old boxer Georgie stood in some wet concrete at the back of the pub when we had an extension built. We took a wax mould from her paw print in the concrete and I made into a tattoo. She's no longer with us, but she was my best mate and trusty sidekick.

'It embraces people who think outside the box.'

I've got a sneaky bolthole down there. I've been going there for 15-20 years. I love Whitstable.
Whitstable is lovely with a slightly London edge but with a slightly more artistic, bohemian feel. It's chilled out and slightly leftwing. It embraces people who think outside the box. That's probably the best way of describing it.

When I'm down there I'll eat at The Sportsman, in Seasalter. Stephen Harris is one of the best chefs in the country and the food there is fantastic. Or JoJo's over in Tankerton.