The chef who holds 7 Michelin stars…

Chef Yoshihiro Murata is the only chef in the world to hold seven Michelin stars. He is the third generation of Japanese super chefs to run the century-old Kikunoi restaurant in the Japanese city of Kyoto. He is world-renowned for redefining and promoting Japanese cuisine and he regularly mentors the world's best chefs like René Redzepi and Heston Blumenthal on Japanese cuisine and 'umami' – 'the fifth taste'. We were lucky enough to speak to Chef Murata just before the launch of his new high-end London venture, Tokimeitē, in Mayfair.

What dishes can we expect on the menu?
The highest-quality Wagyu beef, rice and sake are all brought over from Japan, but the rest of the ingredients are sourced locally. This means we get the best results in dishes such as the Wagyu Sukiyaki (Japanese beef with onion, watercress in miso dashi and truffle sauce on the side) and the Wagyu Rei Ribeye Shabu Shabu (Japanese beef in boiled water; the name shabu shabu comes from the sound of the beef moving around and cooking in the water).
What's your favourite dish on the menu?
Wagyu steak with wasabi.

What did your chef training involve?
When I was 20 years old, I went to France to study French cuisine – that was 44 years ago. At that time, French people had no idea what Japanese cuisine was – they thought theirs was the only cuisine in the world! I always knew that 'haute' French cuisine was similar in quality to Kaiseki cuisine (the highest level in Japanese cuisine) – the only difference was peoples' awareness of it. So when I came back to Japan, I made it my life mission to promote high-quality Japanese cooking all over the world.

Does sushi appear in high-end Japanese cuisine?
200 years ago, sushi was street food, only eaten by the poorer communities. Nowadays, everyone eats it, and it can be seen on top restaurant menus.

Have you seen more chefs coming to Japan to learn to cook?
The numbers are increasing all the time. After the UNESCO registration, I helped establish my home region of Kyoto as a centre for training chefs. It is a special zone where chefs can get an easy working visa. This way, they can train in proper 'washoku' cuisine and take their expertise around the world.

What do you think is the dish that you will be known best for?
I represent Kyoto and traditional, formal Japanese cuisine. Kaiseki (the highest quality Japanese cuisine) came out of the Kyoto prefecture.

Do you have an easy Japanese snack that anyone could make at home?
Melt some butter in a pan, and wait till it goes brown, then add soy sauce and finely chopped garlic. Boil some edamame then drain, put into a bowl and stir through the soy mixture. This is a great appetiser to have with beer or wine.

*You can buy raw whole edamame from specialist Japanese shops and online. 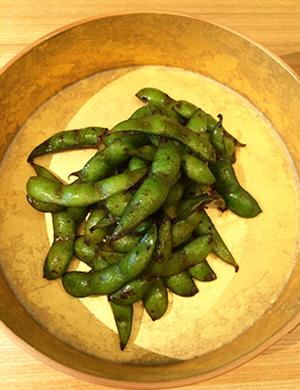 They really are deliciously moreish...