Inside The River Cafe: founder Ruth Rogers tells the story of her love affair with Italian food 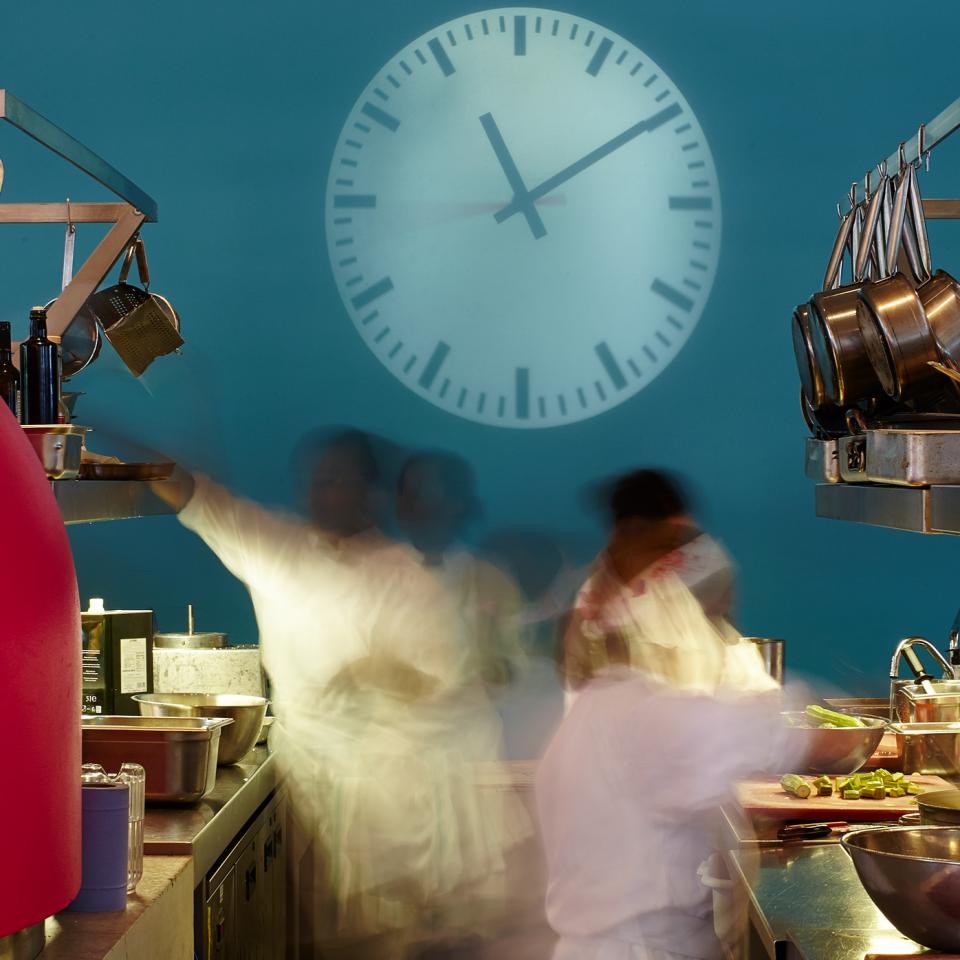 Every morning at The River Cafe just three or four hours before guests arrive for lunch, Ruth Rogers and her chefs dream up a perfect Italian menu.

Some days there will be homemade fresh pasta with mushrooms and thyme; on others, scallops with sweet cherry tomatoes and a zip of red chilli. ‘In the UK you go to the supermarket with a menu in your head. In Italy you look in the cupboard and see what’s there; you go the market, you see what’s best,’ says Ruth. ‘That’s how we work in The River Cafe. We come in the morning, see what’s been ordered, see the team we have, and then we write the menu.’

It’s no exaggeration to say that The River Cafe revolutionised the way we eat in Britain. When Ruth opened the restaurant in a quiet patch of west London with her friend Rose Gray in 1987, it was a modest affair, mostly frequented by the staff at Ruth’s husband Lord Rogers’ nearby architectural practice. But the pair’s vibrant dishes, inspired by time spent in Italy – top-quality ingredients, served simply and beautifully – were a breath of fresh air to diners who had become bored of the fancy foams and drizzles of ‘fine dining’. The restaurant won a Michelin star in 1998; this year, it is celebrating its 30th birthday, and has released a new cookbook to mark the occasion. 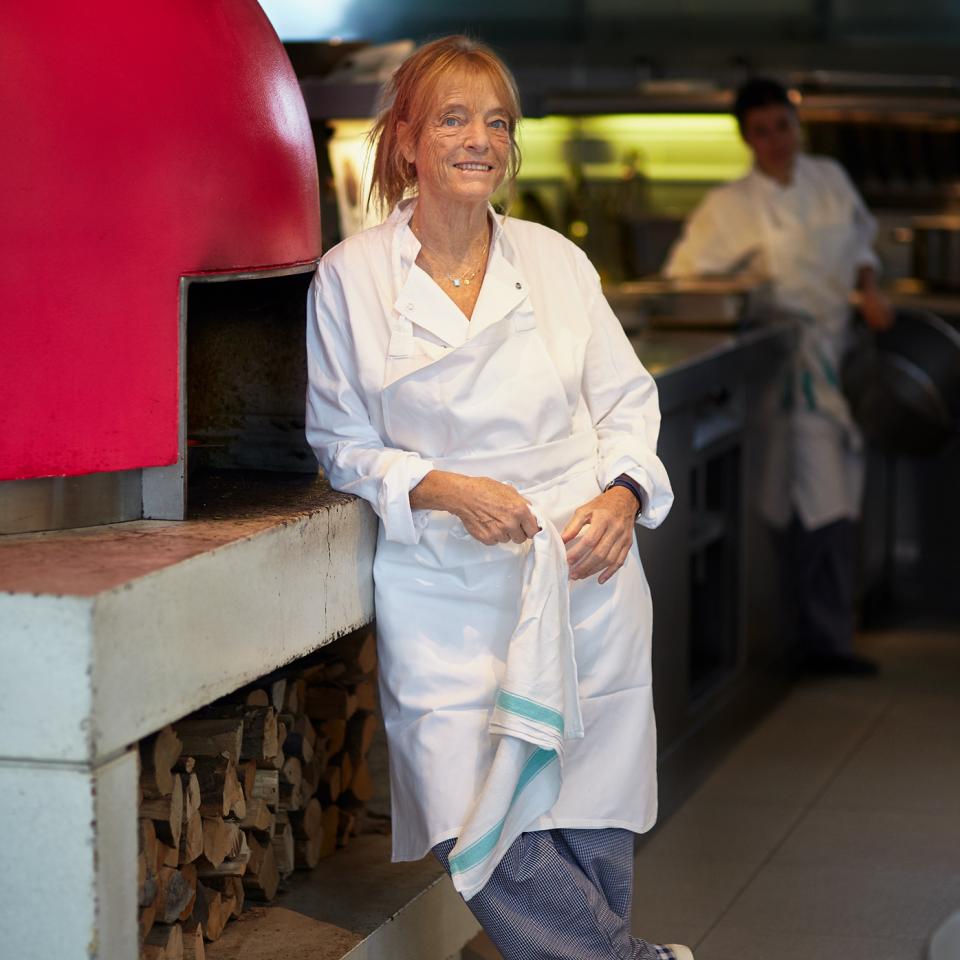 Writing the book has caused Ruth to reflect on how much British food has changed over the past few decades. When The River Cafe opened, Italian ingredients were hard to come by. The leafy green cavolo nero was so unknown that Ruth grew it herself in the restaurant’s pretty garden; Rose was once so determined to cook with a giant pumpkin she found on a trip to Italy that she lugged it to the airport and bought it a business-class seat. ‘Now you can get really good ingredients in supermarkets, which is so encouraging,’ says Ruth.

Before I arrive at The River Cafe, she asks me to pick up a selection of Sainsbury’s ingredients, and quickly gets to work transforming them into River Cafe classics like pumpkin squash risotto and tomato sauce, just to show me how easy it is to cook brilliant Italian food at home. ‘When Rose and I published our first book, it was all very well to put salted anchovies in a recipe, but people would come up to us and ask “Where can I get them?”’ Ruth says, as she carefully stirs the pot, coating each grain of risotto in a pool of butter. ‘With each cookbook, those questions decreased, because supermarkets became more responsive to what people wanted. 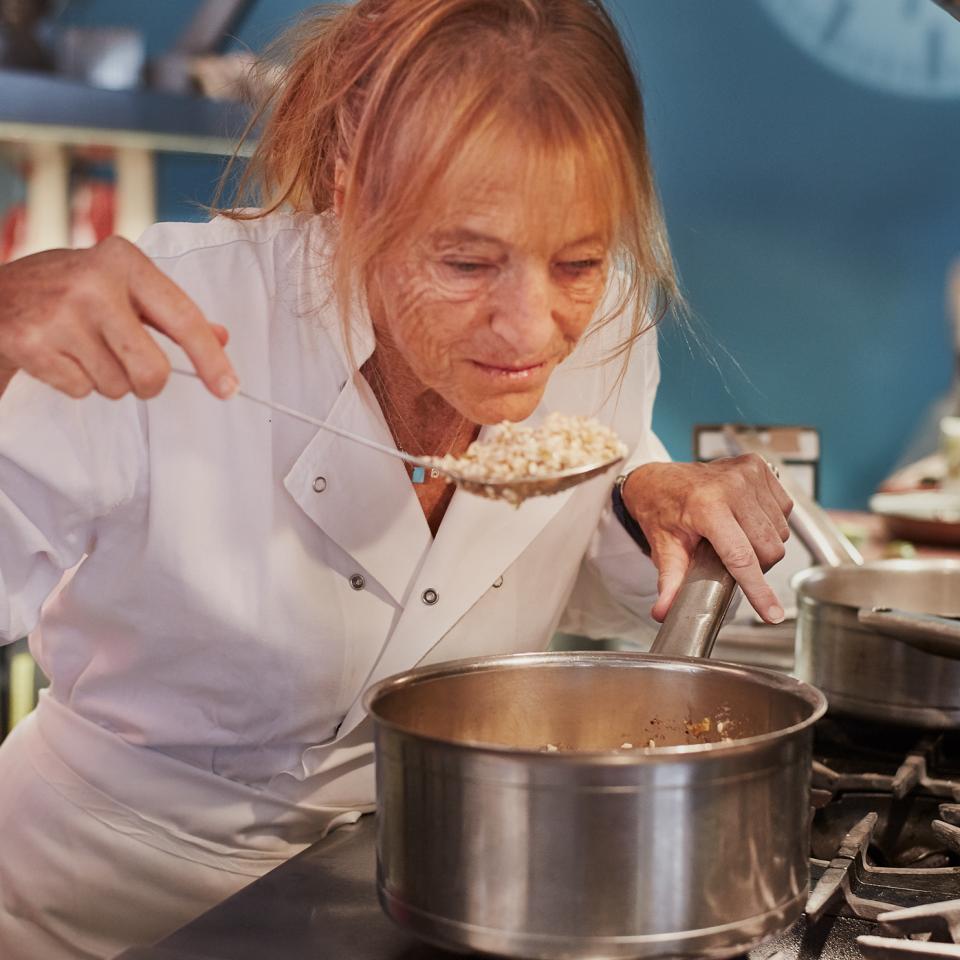 ‘I think one of the things that has really changed British eating habits is travel. The minute [airline entrepreneur] Freddie Laker did those cheap flights to Europe, people could go to Italy and Greece and experience that food. When they came home they started to ask, "Why can’t we eat that food here?"’

The story of The River Cafe has not been without sadness. In 2010, Rose passed away from cancer, aged 71. ‘This is the first cookbook I’ve written without her,’ says Ruth. ‘There is no way to even begin to say how the loss of Rose has affected my life. She was my best friend, colleague, my everything. It sounds rather trite but I always say the best tribute to her is how well The River Cafe is doing – the energy, the team, the food. I can see the way somebody does something is how Rose taught them, or I hear someone say "Rose used to say…" And I love that.’

The team’s energy is impressive. The ink on the day’s menu is barely dry when around 20 chefs swing into action, turning the kitchen into a production line. As Ruth and I put the finishing touches to her hazelnut and ricotta cake – ‘Move the chocolate round on the grater, rather than up and down, it’s much easier’ – one chef chars red peppers on a grill; another sprinkles a turbot with salt; a third stokes the vast pink wood-fired oven. Even waiters are chipping in with the kitchen prep; no surprise, when 140 people are due for lunch. ‘It’s an unusual way of working, but it keeps the freshness,’ says head chef Sian Wyn Owen, Ruth’s right-hand woman, and co-author of the new book. ‘In a few hours, we’ll write a new menu for dinner.’

At 69, some people might be thinking about slowing down, but it’s hard to imagine Ruth ever stepping away from The River Cafe. Like the Thames flowing outside the window, she is a force of nature; darting from one chef to the next, running upstairs for a quick meeting (it takes a confident cook to leave a risotto on the stove), beckoning me impatiently to come and see her dessert room, where the air is rich with the scent of butter and sugar. But she also seems to take the time to appreciate the good things in life; as we wander past the kitchen garden, she pauses and says proudly, ‘Aren’t the courgette flowers wonderful?’