How are you getting on with Meat Free Week?

We're three days in and so far I'm doing OK (tofu stir-fry, halloumi wrap...), but I've realised how much meat I eat without even thinking about it. In need of inspiration, I turned to the latest book from Rachel de Thample – Five: 150 Effortless Ways To Eat 5+ Fruit And Veg A Day (Ebury, £14.99). 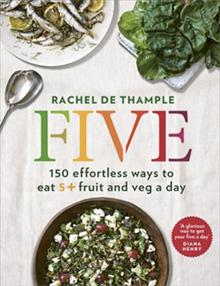 While it's not a vegetarian book, Five is all about eating as much fruit and veg as you can, so I figured it'd be a great place to start. There's a fascinating list at the beginning of what makes up 1 portion of your 5-a-day. Only 2 dried apricots, 5 Brussels sprouts or 5 strawberries – very doable. Two sticks of rhubarb! That's a lot of rhubarb crumble...

Flicking through the recipes and beautiful food shots (minor gripe - not all recipes are accompanied by an image), I was spoilt for choice for a veggie supper. The recipes are healthy in an approachable way; they're not based on super-trendy, expensive ingredients.

There's a good range of recipes, too – from 'breakfast truffles' (energy balls to you and me) and espresso mushrooms with tagliatelle to pumpkin in a cheesecake and gluten-free chocolate ginger pear cake. And each recipe flags up how many of your 5-a-day are it contains.

In the end, I plumped for Athenian rissoles with Pavlos' sauce - chickpea 'meatballs' in a rich tomato sauce that would make up 4 of my 5-a-day. 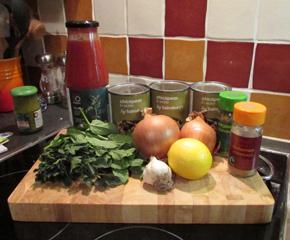 The recipe was easy to follow. I'd never grated an onion before but it had me weeping more than when Simba's dad died in The Lion King. But they did soften very nicely, much quicker than if I'd attempted to finely chop them. It took me a bit longer to prep than the recipe suggested (all the crying rather slowed me down), but having added the recommended 500ml water to the sauce I think it benefited from the extra cooking time.

The shallow-fried rissoles were very delicate in the pan, so next time I make this, I think I'll try stirring in a beaten egg to help bind the chickpea mixture or leaving them chill in the fridge for a bit. They tasted yummy, though, but the tomatoey sauce with a hint of cinnamon was definitely the star of the show. I'd made some steamed courgette noodles, too, which completed my five-a-day in one meal – I felt so pleased with myself, I went off and enjoyed a big bowl of ice cream... 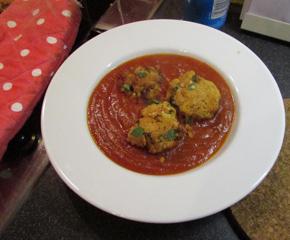