Food writer John Whaite went to Canada on a life-changing trip – here he shares his memories and the recipes he brought home... 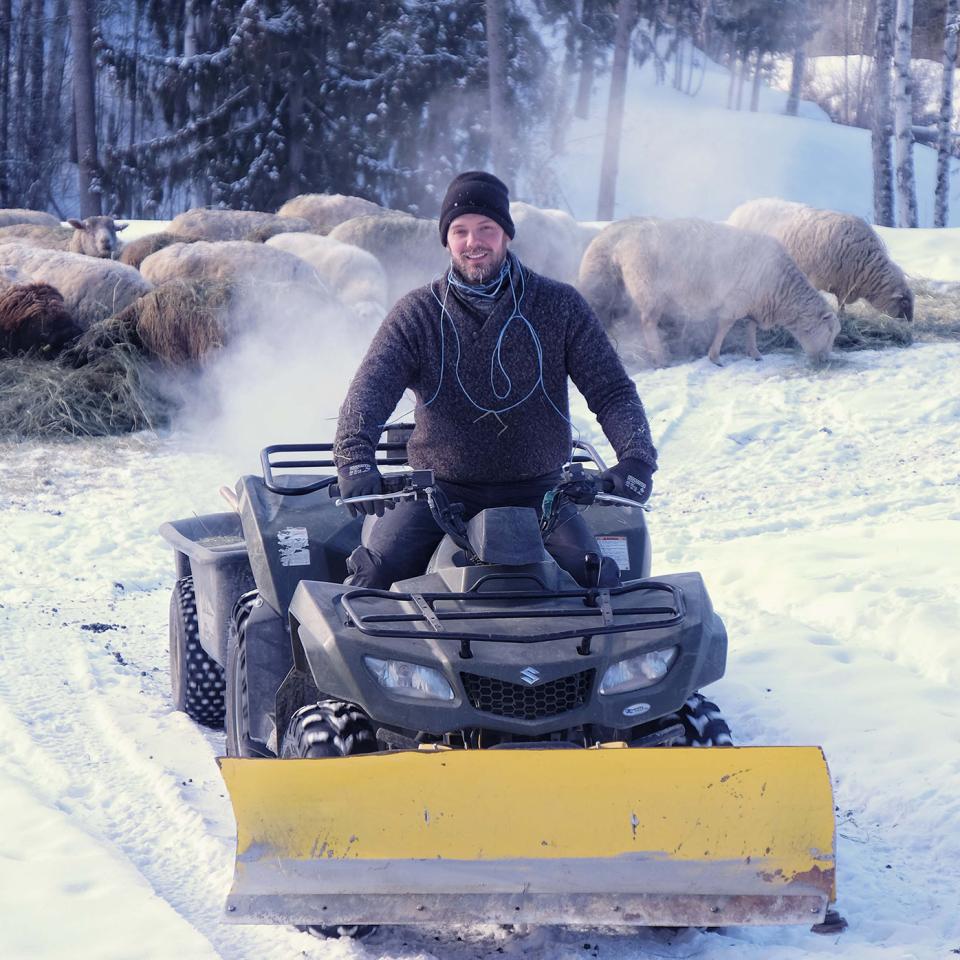 ‘The pitter patter of snowflakes as they hit the ground is the most calming sound in the universe,’ says John

Have you ever heard the sound snow makes as it flutters down from the heavens? I hadn’t. I thought that when people spoke of such a phenomenon, it was just an emphatic way of expressing the silence that snow can bring. But when I found myself in Barrière, Canada, at New Year in 2019, I learned that the pitter-patter of snowflakes as they hit the ground is the most calming sound in the universe.

That tranquillity was precisely what the doctor ordered, literally. As someone who suffers from depression I’ve often had to endure bouts of all-consuming darkness, but this time around my needs were urgent. I was on the verge of doing something desperate and I knew I had to escape. I told my partner my plan: to find a farm in the most remote place I could, and to just go. He was worried, naturally, but he understood. He knew that if I didn’t go, he and everyone else could lose me forever. I felt as though I had nothing left to give. Even food, which had once been both my physical and spiritual fulfilment, was no longer interesting. My conversation with food had run totally dry. 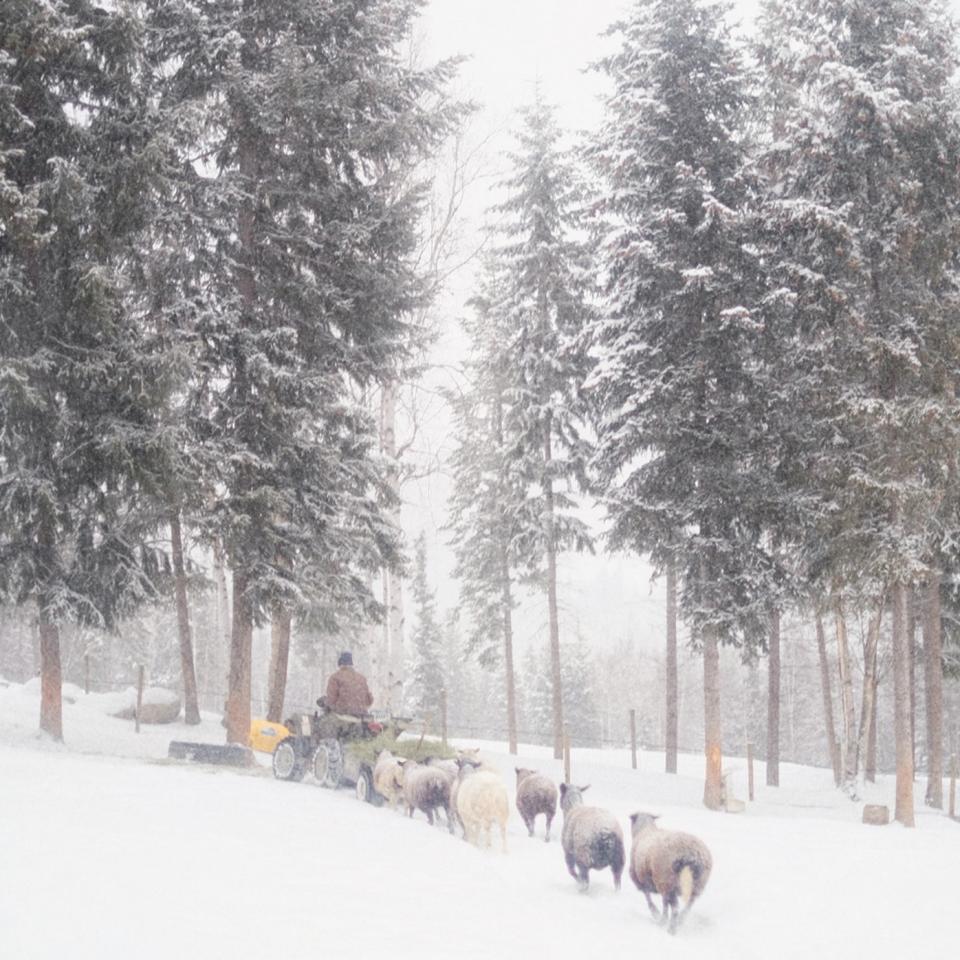 I found the farm – a 100-acre holding carved into the pine-littered mountainside of British Columbia – via the WWOOF (world-wide opportunities on organic farms) website, which is like a dating site for volunteers. You create an online profile and search for farms that are in need of help. In return for bed and board, you assist the farmers with their chores and become integrated into their lives for as long as you want to stay. Some people stay for many months. I, however, crossed out six weeks in my diary and booked my flight.

Of course I envisaged the worst – ‘Bake Off winner slaughtered by outback farmer in the Canadian wilderness’ – but still I was utterly compelled to take that flight to Vancouver. From there, a four-hour bus journey to Kamloops over the Coquihalla highway; a road so treacherous it sees around 500 accidents a year, many of which prove fatal. Dan, the farmer, met me and drove me another hour to Barrière. Although in his 70s, he looked incredibly healthy, and I’d soon learn that the clean air and home-grown food was responsible. He and his wife Angela, a part-time nurse and full-time farmer, ate pretty much only food that they could grow or rear themselves. Aside from the shop-bought essentials, everything on their plates came from within the boundary of their farm. 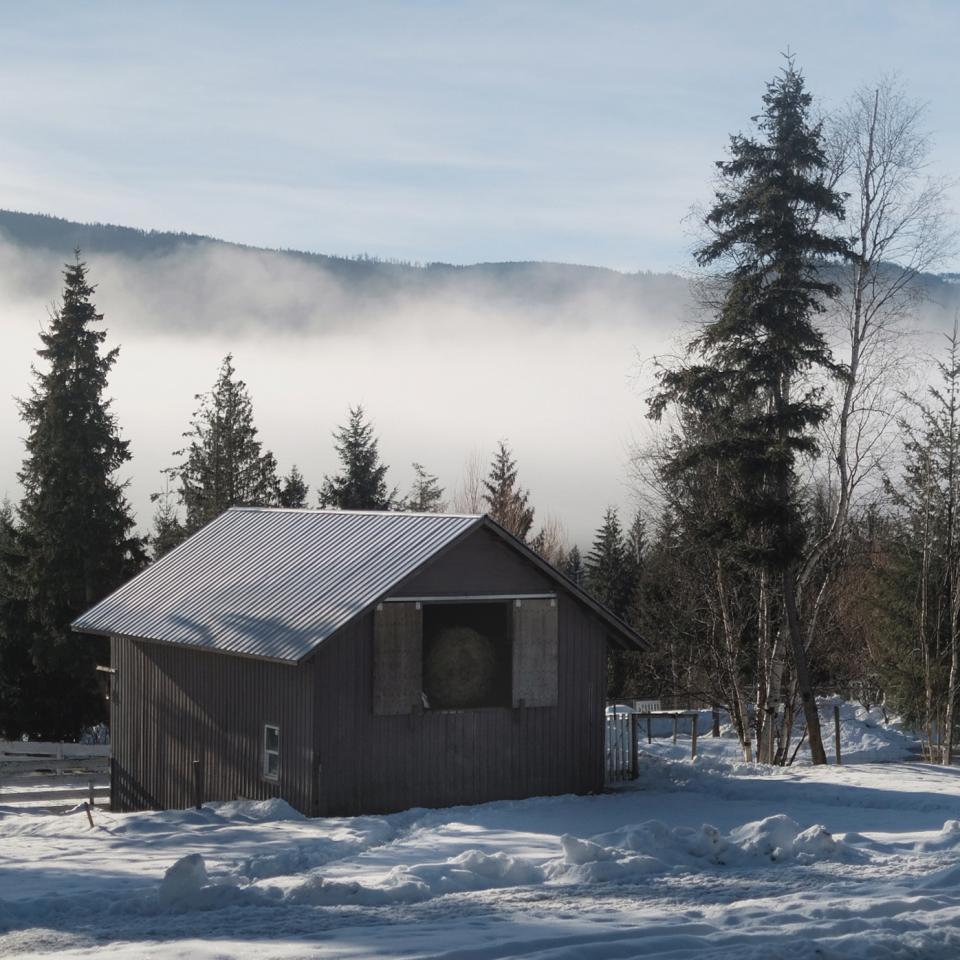 ‘It took a freezing winter to rediscover the warmth of life,’ says John

I arrived at the farm as the sun dropped behind the mountains, which in shadow looked like shards of torn black paper. The sky above them was pale pink and the first pinpricks of stars began to appear like bubbles on a pancake. The smell of woodfire hit me as I jumped down from the truck – the entire house, which Dan and Angela had built with their own hands, was heated by an outdoor log burner. Heavy, fast animal footsteps got louder as something neared. Dan had already regaled me with tales of wolves, bears and cougars, so my instinct was to run. Before I could, something hit me in the legs and buckled my balance. Luke, the enormous, fluffy Italian Maremma came to inspect me to see if I would respect his turf. Naturally territorial, the breed makes the best guard dogs. He accepted me and we would come to share cuddles every morning and night.

The chores on the farm were a welcome distraction from my mental collapse. Each morning I’d collect the eggs from warm, broody chickens. Despite their pecks, I’d thank them for their gifts and the moment of warmth my cold hands would feel from their feathered bodies. As a baker, I’d never fully appreciated eggs. I’d break them mindlessly into my cake batters. But when you collect them in person and they are still warm, they are precious orbs which command nothing but deep gratitude. Any food scraps from the kitchen would be tossed to the hens, who would run to me, frantically snaffling anything they could – the only morning rush hour I would encounter for my entire stay. 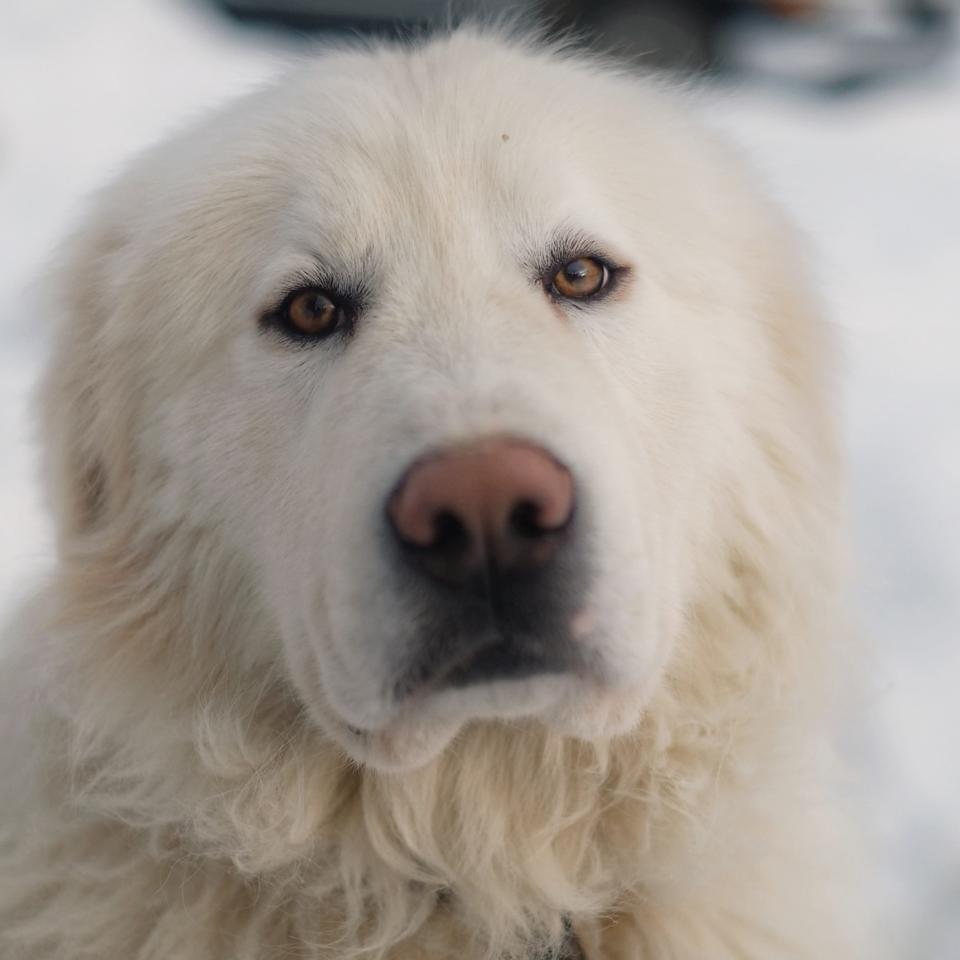 After the hens, I’d load the trailer with a mountain of hay for the sheep and Tonto, the single llama who dilly-dallied at the back of the queue for morning feed. Jane, the all-white sheep, was my favourite. Always at the very front of the herd as I drove their food to a clean patch of snow, she’d leap into the hay as I pitch-forked it onto the ground. I’d repeat that process for the lambs; although they weren’t given names. Angela felt it easier to say goodbye that way, when the time came for their slaughter.

After I fed the pigs and cows and spent what felt like an eternity smashing the ice on their water troughs and lifting it out with a grimace, I’d head back to the house for coffee and a snack. The house was constantly filled with a homely scent. Angela made bread from scratch every other day, so there was always toast which I would slather, liberally, with peanut butter or honey from Angela’s friend’s hive.

She and her son, Kieran, were masters in the kitchen. The soups she made were golden elixirs. After a morning in the -15°C air, they radiated through our bodies, breathing warmth and life back into us. Her stews, full of home-grown veg and home-reared meat, were so delicious. Whatever she created, it was made with love in her heart, and over the weeks I was there, her food and affection slowly thawed my frozen soul. 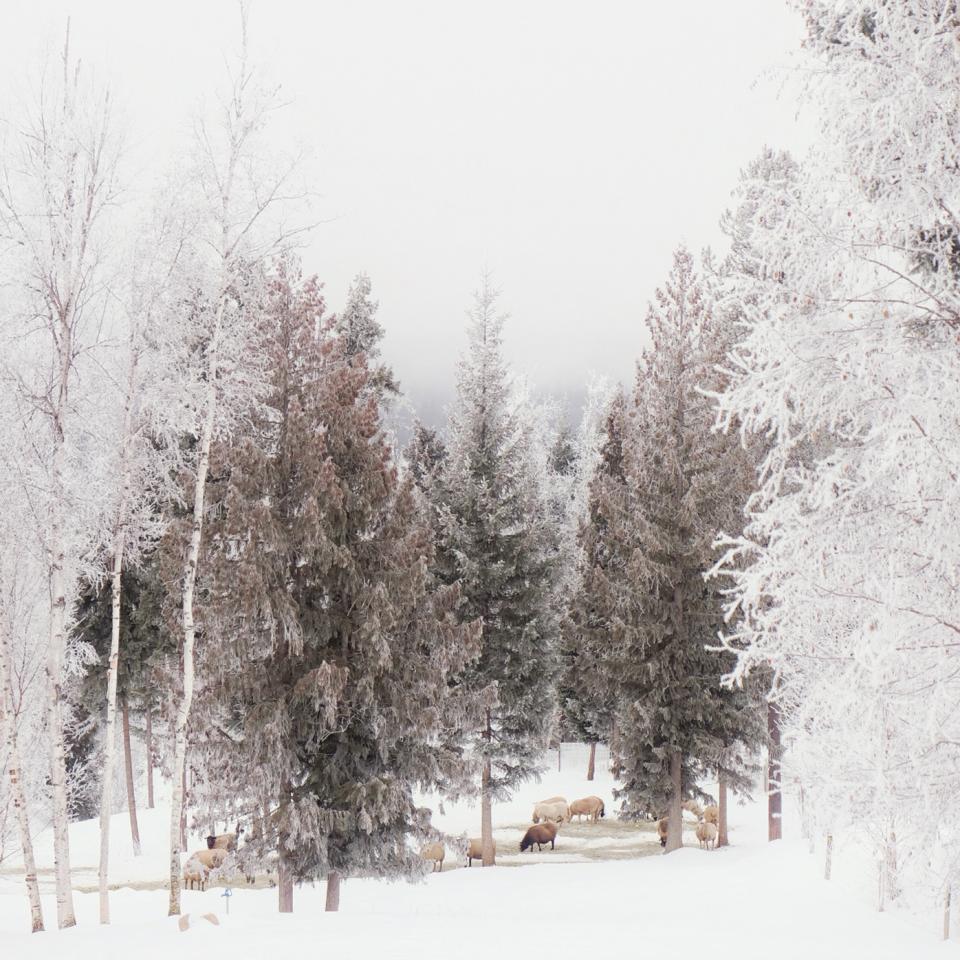 Kieran was such a wonderful cook. He and I spent every weekend nestled away in the kitchen while the temperature outside plummeted to as low as -26°C. I taught Kieran how to make choux pastry and crème patissière and, in return, he introduced me to the Canadian staple, Nanaimo bars. Dan and I would enjoy a second slice at coffee time when it was just him and me, while Angela worked in the medical centre. Every meal, we ate together as a family, and at night we’d wash the dishes, by hand, to put the kitchen to bed. That is something I now do every night at home. That small change from stacking a dishwasher to cleaning away the dishes as you contemplate the day, puts it all into perspective, and is something I’d wholeheartedly recommend.

I look back on these memories with much fondness and gratitude. It took a freezing winter on a remote farm to rediscover the warmth of life and company. Out there in the wilderness I rediscovered who I am, and my conversation with food can now continue. 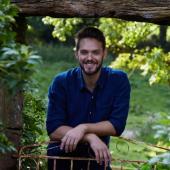