Festival feasts to try this summer

The food line-up has become as important as the music at summer festivals. We meet three street food traders whose bright flavours would revive even the most hardcore of festivalgoers… 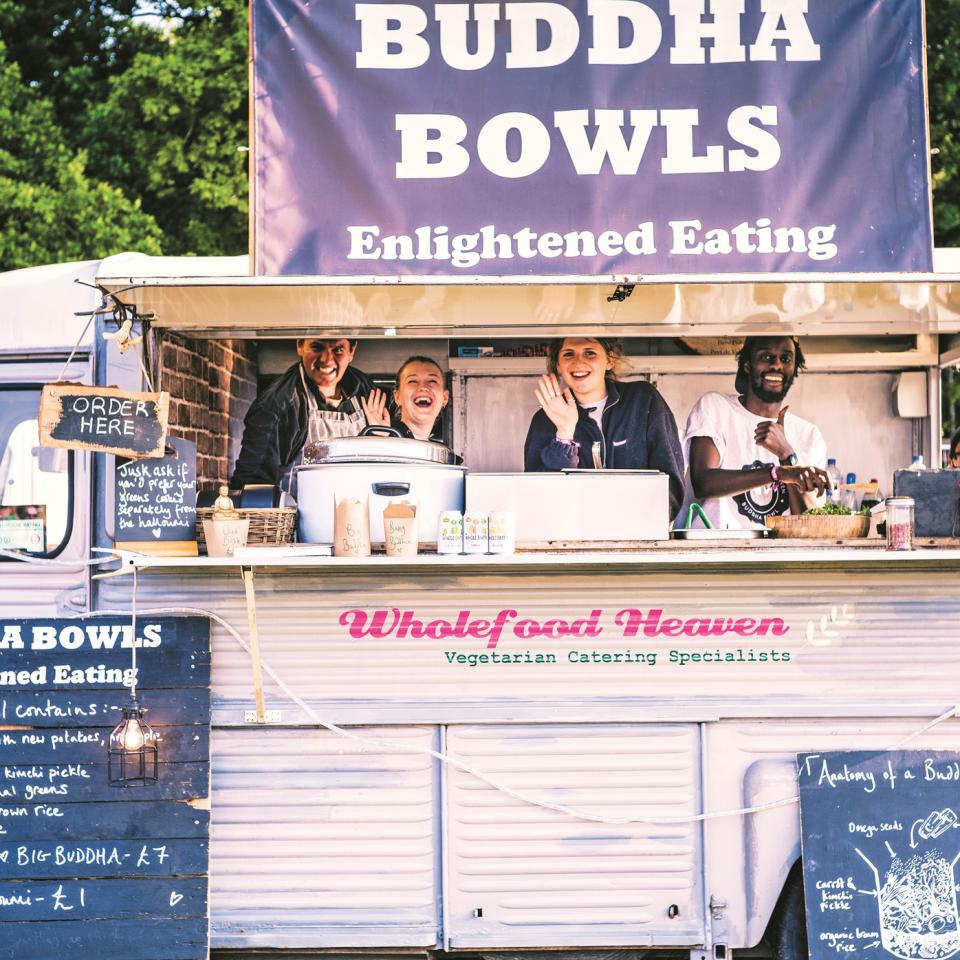 The owners: Charlotte and David Bailey.

Charlotte: We first heard the term from an American chef friend of ours. We thought it was a very cool concept and interpreted it as a healthy bowl of your favourite stuff. It was on this premise that we devised our signature Buddha bowls: short-grain brown rice with a veggie massaman curry, steamed kale, a carrot and homemade kimchi pickle, omega-seed sprinkle and, if you’re a cheese fiend, halloumi.

We’re very busy on Sundays, when people have been going for it all weekend and are desperate for greens. They’re like: take me to the kale! It’s a healthy, substantial, well-balanced meal and after a few days of dwelling in the mud, it ticks all the boxes.

Is it hard work?

Yes, and you need a good team because we do 18-hour days. One year, we did so many festivals that we were looking out of the van thinking, actually, which one is this? We have done three and a half months on the road, but we’ve scaled back a bit this year.

What’s the weirdest thing that you’ve ever seen from the van?

At one festival, we had people dressed up in S&M gear whipping each other. We’ve also had people walk off with whole bowls of chilli flakes, and one guy who came up and just slapped both his hands down on the grill. Someone wouldn’t pay because he ‘wasn’t in the money frame of mind’ – that was at a yoga festival. We’re not particularly mercenary, but we had to tell him that that wouldn’t work for us. 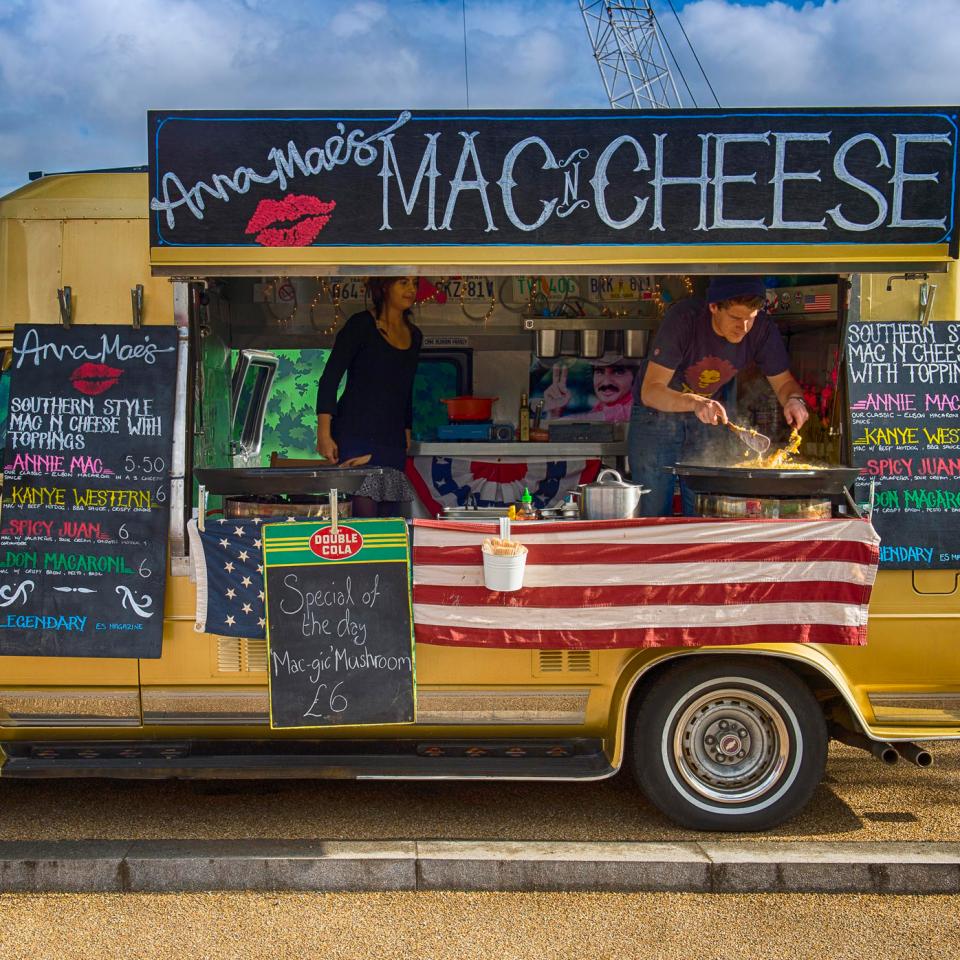 How did you get started?

Anna: We’d both hit 30 and didn’t know what we wanted to do with our lives. We loved American food, so started selling pulled pork at a market once a week, and it got so busy that we decided to do it properly. There was no investment or anything, just £100, which we kept reinvesting. Old school! For ages our macaroni and cheese was just a side, but we found it more exciting than just meat in a bun. With mac ’n’ cheese you can have different toppings, so it’s more creative.

What are the toppings?

Tony: We do a lot. The most popular is bacon… we spend weeks braising, pickling and curing ingredients for really interesting specials, and then people are like, ‘You know what? I’ll just have the bacon’. My favourite is the spicy one with jalapenos, sour cream, coriander and chipotle, and then we have dirty hotdogs – the Kanye Western – which is barbecue sauce and crispy onions, which lots of blokes have. The Don Macaroni is topped with bacon and pesto.

Why do you think people love mac ’n’ cheese?

Anna: Everyone likes cheese; it’s filling, tasty and easy to eat. At festivals, we get people coming back every day, having different toppings.

Tony: It all depends on the festival. At Camp Bestival (a family-focused festival) it’s just kids, so there’s hundreds of them desperate for mac ’n’ cheese at 12pm. Shambala will be more of a 4am job.

Anna: The best thing is that everyone is on holiday and super happy and friendly. It’s a shock when you come back and serve at a market on a Thursday lunchtime, when someone has half an hour for his or her lunch break. When you do a whole season of festivals, it’s so chilled out and everyone is so free from worries, it’s hard to come back to London and readjust to normal life. 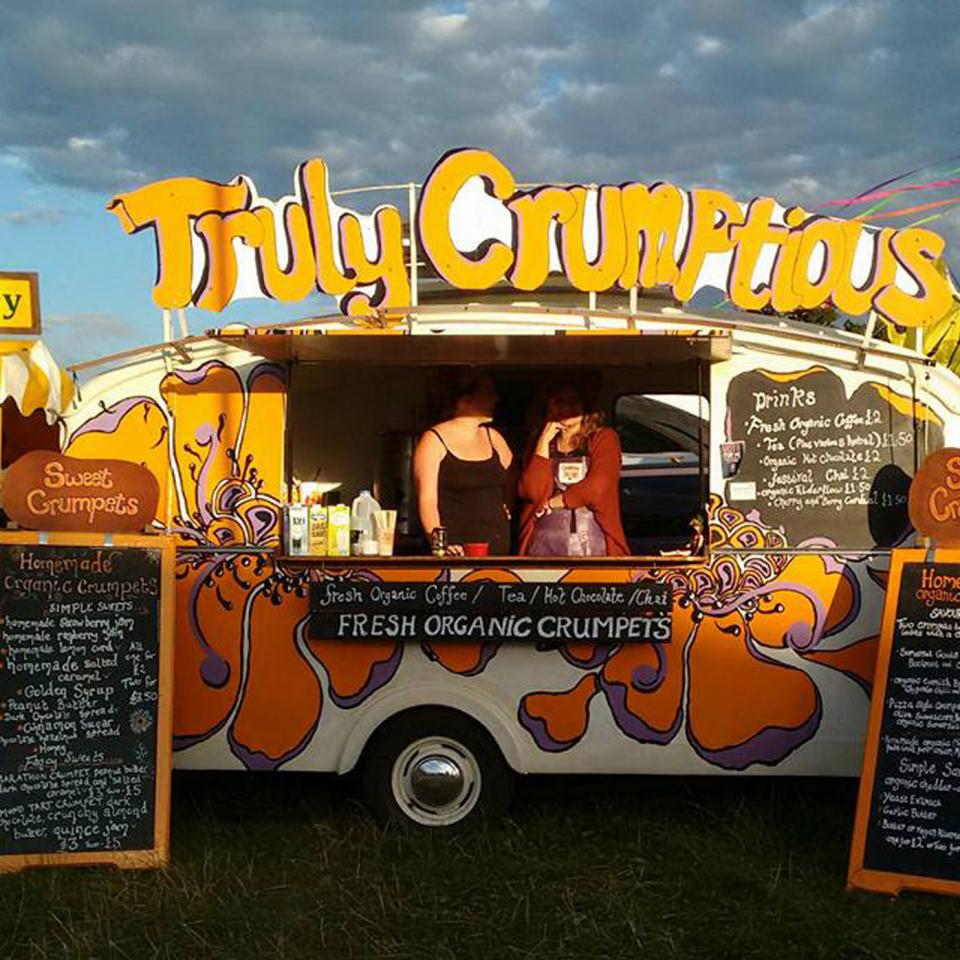 The food: Home made crumpets with sweet or savoury toppings.

I used to cater food parties. One time I made crumpets and everyone loved them, so I thought, ‘I could do something with this’. At a festival, crumpets are good at any time of day, and they are also a particularly good late-night snack for soaking up the booze.

Are they tricky to make?

It took me a year of trying different recipes to get it right. To my surprise, the vegan version without milk was everyone’s favourite. My recipe is pretty foolproof now.

Is it OK to put them in a toaster?

Yeah, there’s no crumpet snobbery here. That said, a grill is best. I cook mine in square moulds on a griddle. Our crumpets are much softer than shop-bought ones, without as many holes on top, so I prod them with a fork. They have the nice tubes/holes inside though, to soak up the butter.

Festival crowds are the best. You get to experience a tiny piece of the festival, you’re in an environment where people are upbeat and excited, and you’re far away from the day-to-day drag. What’s lovely is that you make people happy, like the 2am weary punter, who’s wide-eyed, cold and hungry. I think the pressure is addictive too; it’s the ultimate challenge to feed thousands of people in a field.

Why do you think people love crumpets so much?

It’s the high-carb content, plus they’re squidgy – a comforting texture – and buttery. The beauty too is that they can be either sweet or savoury.