6 things I tried at Hyper Japan

Last weekend I went to Hyper Japan at The 02 in London. Not only was it the most colourful place I've even been, but I also found some brand-new culinary delights that I've never come across before.

Here are 6 of my favourites...

I really couldn't decide what to eat for lunch, but eventually settled on an Okonomi-yaki, which is a kind of hot Japanese omelette. You can find them all over Japan but it derives from Osaka. Mine had spring onions and pickled ginger in the batter, and was topped with a special Oko sauce, which tasted a bit like a thicker, sweeter soy sauce. Chopsticks were tucked into the middle of the omelette – the perfect street-food lunch. 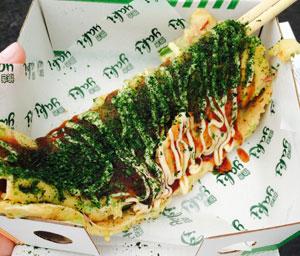 I can't believe I've never had a bubble tea – but at Hyper Japan, they were everywhere! As it was a scorching day I opted for a lychee jelly and bubble juice – very refreshing.

Bubble tea is originally from Taiwan and usually contains a tea base that is shaken with juice or milk to make it frothy. The bubbles refer to the balls at the bottom of the drink (see below), which are made from tapioca and taste like chewy jelly sweets. They even have big straws to make sure you can get to the sweets. 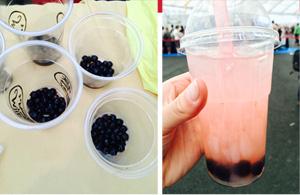 These little things also took my fancy. Dorayaki are two little sweet pancakes sandwiched together with a red bean paste. It's a nice fluffy outside with a smooth nutty filling.
There were lots of different-flavoured pancakes including chocolate, berries and custard. 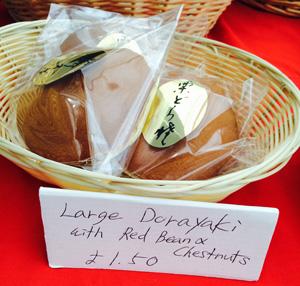 Most people are familiar with Japanese sake – a Japanese rice wine, but I tried sparkling sake! It was sweet and smooth, a bit like sweetened Prosecco with very fine bubbles. I'd definitely recommend it a good starting point if you haven't tried sake before... 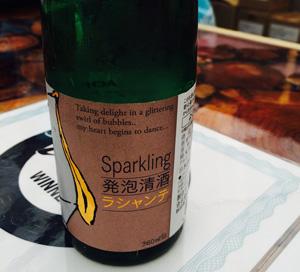 While I was walking round I saw people with these mountains of ice...
I tracked them down at a stall originally named Nice Ice. It's simply shaved ice with different-flavoured syrups – most people use electric machines to get the ice consistency but in Japan you still see people using a hand-controlled machine to spin a block of ice over a giant shaving blade. They had lots of flavours: matcha and red bean; mango; strawberry; and this one, triple chocolate. 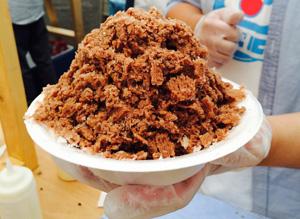 I walked past this colourful production line and asked what they were making... onigiri. Onigiri was the original dish that made rice portable to eat. These ones were stuffed with tuna mayonnaise – but flavours can include shrimp, tempura, pork, roe, squid and pickled veg and they can also have a strip of nori around them to stop sticky fingers. 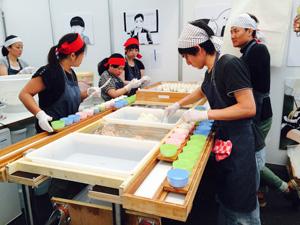