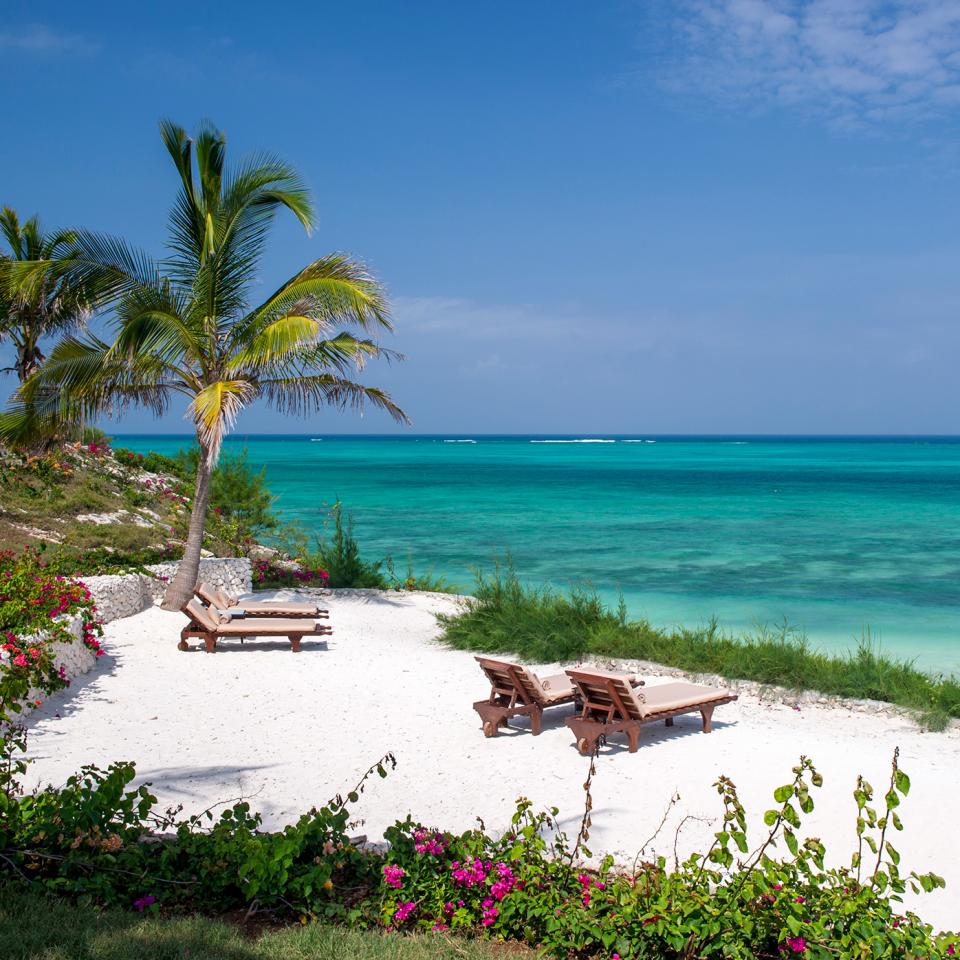 The relaxed Zawadi Hotel in Zanzibar is an ‘absolute beauty’, with suites looking over the ocean and the beach

‘Jambo!’ cries the small boy, as he pedals furiously along the shoreline on a rickety bicycle. He waves and grins, white teeth flashing, as I return the greeting – ‘Hello’ in Swahili – and then he is gone, disappearing beyond a clump of palm trees, his voice still carrying on the breeze.

We clamber aboard a fishing boat waiting at the water’s edge to take us to our destination, less than two minutes’ away. The Rock Restaurant is perched precariously on a coral outcrop, and can only be reached by foot from Kijiweni Beach when the tide’s out. Once we’ve climbed the worn wooden steps, we push open the door to discover an establishment buzzing with life. Smiling waiters scurry to and fro while barefooted diners chat over platters of seafood or relax on the deck, taking in the views of the Indian Ocean which stretches to the horizon like shimmering azure satin.

We order the classic Zanzibari dish, ‘fish in coconut sauce’ which here has been given a modern twist: blue marlin carpaccio laced with coconut, chilli and lime. Chilled rosé is poured and we raise a toast: to Zanzibar! 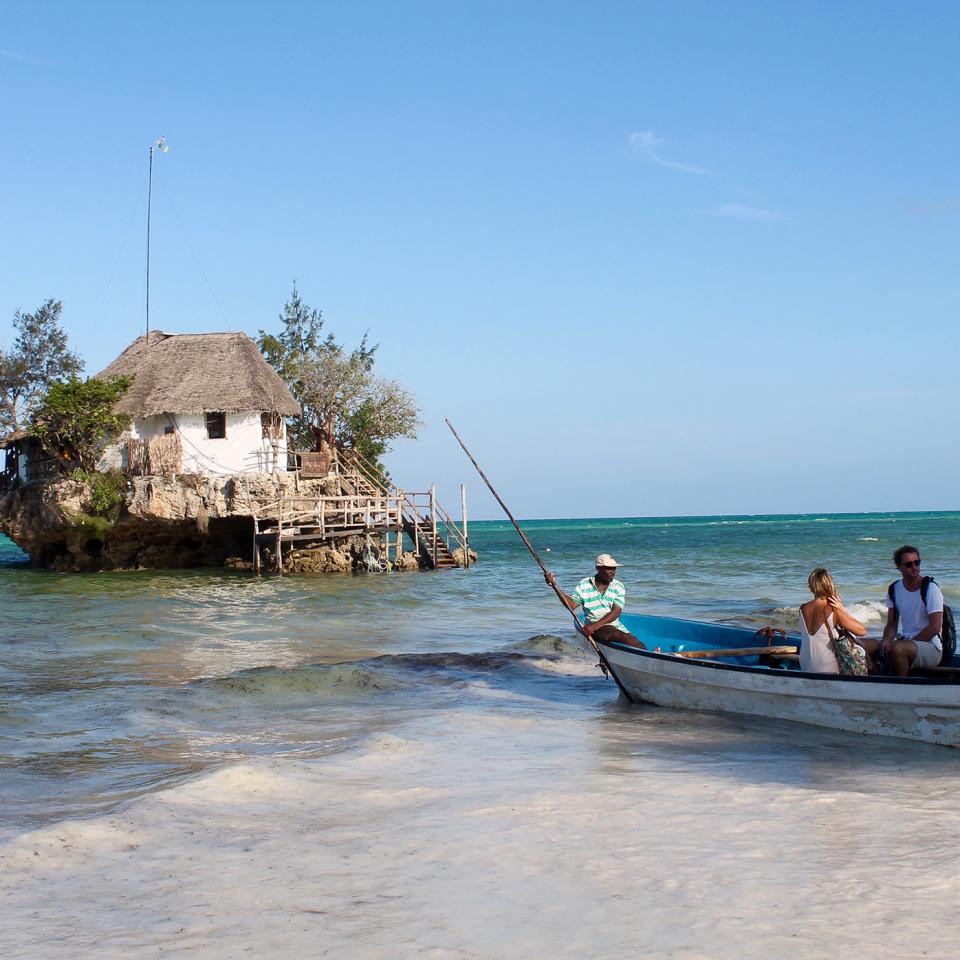 The Rock Restaurant, ‘perched precariously on a coral outcrop’

Even the name of this archipelago just off Tanzania sounds like a magician’s command, and it’s impossible not to fall under its spell. ‘The Spice Island’, as it’s known, has myriad tangled roots with African, Arabian, Indian, Persian and Far Eastern influences woven deep into its heart, thanks to more than 2,000 years of trading. This heritage is much in evidence today, from the architecture and culture, to the cuisine which is – quite literally – an exotic melting pot of ingredients and flavours. There is also a more sobering shadow cast across this sunshine isle, for Zanzibar was also the dark epicentre of the East African slave route in the 19th century.

This complex history is shared with me by Abbas, my charming Zanzibari guide on a day that takes me on my very own spice route, and then on to the intriguing capital of Stone Town. At Kizimbani Spice Farm, I smell and taste a dizzying range of tropical fruit and spices including lemongrass, ginger, turmeric, cinnamon, vanilla, cardamom and not least, nutmeg (‘Good viagra for ladies’ Abbas informs me solemnly). Most important are cloves – the dried, unopened flower bed of the tree itself platters of seafood or relax on the deck, taking in the views of the Indian Ocean which stretches to the horizon like shimmering azure satin. We order the classic Zanzibari dish, ‘fish in coconut sauce’ which here has been given a modern twist: blue marlin carpaccio laced with coconut, chilli and lime. Chilled rosé is poured and we raise a toast: to Zanzibar! Even the name of this archipelago just off Tanzania sounds like a magician’s command, and it’s impossible not to fall under its spell. ‘The Spice Island’, as it’s known, has myriad tangled roots with African, Arabian, Indian, Persian and Far Eastern – which were bought from Mauritius by the Omani Arabs who ruled from the early 1800s to 1964, and gave Zanzibar its original spice tag. 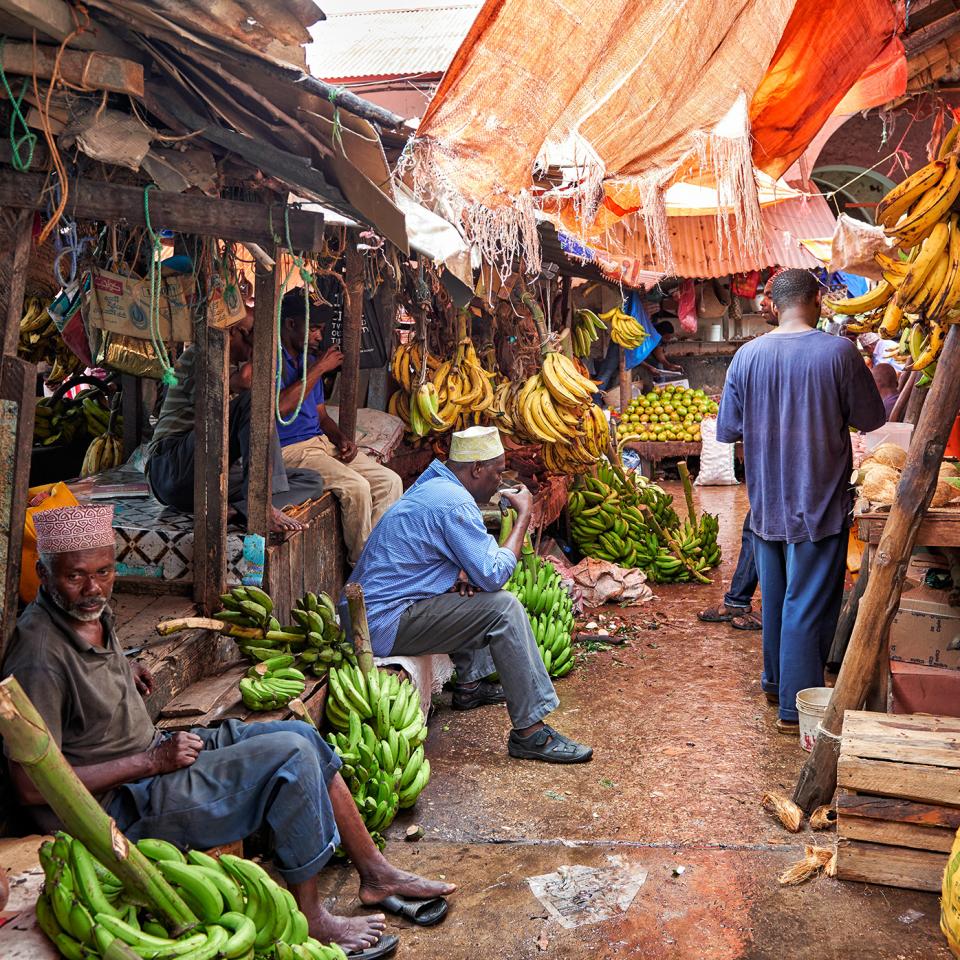 Back on the road, we continue to Stone Town, a Unesco World Heritage Site, passing trucks packed tight with people or livestock, and undeniably poor villages. Masai Mara tribesmen, tall and angular, emerge from bushes and silently watch us pass, while women saunter slowly along the roadside, carrying everything from vast bundles of firewood to petrol cans on their heads. One tiny child, emulating her mother, walks straight- backed, a can of beans perched precariously on hers.

Once we arrive at our destination, Abbas leads me into the covered Darajani market. This is no cleaned-up tourist attraction. The crowded fish and meat halls are a cacophony of sound and pushy activity as auctioneers shout and customers barter; the sellers’ wares are slammed down onto counters and a skinny cat leaps from a high wall, and sits watchful, awaiting her chance. Next door, in the chicken market, the hollering is joined by the incessant squawking of chickens held captive in rush baskets as they await their fate.

I’m glad when we emerge on to an adjacent lane that is filled with stalls selling spices, vivid kangas, and homely shopping baskets. Next we head into the bewildering labyrinthian warren of the old town, an incredible fusion of Arabic and African influences. Abbas takes me through a maze of busy streets, deserted alleyways, enclosed squares and hidden courtyards and pauses patiently while I take in the Arabic-style arches, intricate masonry and beautifully carved doorways that stud even the simplest of buildings.

While tourists are here, this is still very much a working town with people going about their business. There is the sound of a woman singing in her kitchen; men argue amiably on street corners; children play in the squares, and the mosque calls over the rooftops. And everywhere, there are street stalls and trundling carts selling fragrant fresh bread, just-toasted sweetcorn, and cassava roasted on open barbecues and handed out with chilli salt in twisted bits of paper. 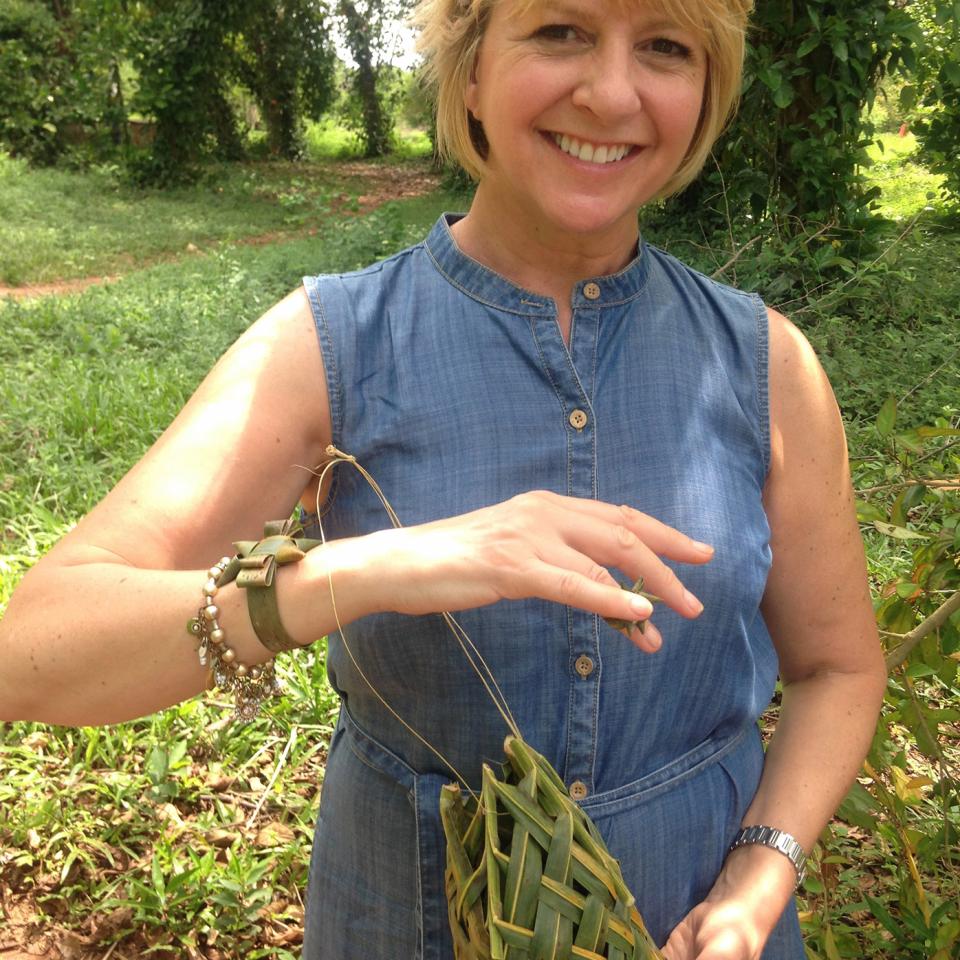 Sharon with her specially made palm handbag

We pause at the quaint Zanzibar Coffee House where the aroma of roasting beans drifts from the door. I sip strong Arabica coffee while Abbas enjoys a traditional kahawa, spiked with cardamom and ginger, before we move on, past crumbling Omani and Indian mansions, colourful shops and markets. Last but not least, we pay a visit to The Anglican Cathedral – built on the exact site of the slave market – and the two adjacent tiny chambers which housed up to 150 people at a time. Abbas and I sit in a peaceful corner as he tells me just a little of what happened here. It is profoundly shocking.

By late afternoon, I’m ready to retreat to the Zawadi Hotel on the magnificent East Coast. This is the newest addition to The Zanzibar Collection – four privately owned boutique residences – and it is an absolute beauty with a driftwood-inspired decor that is calm, chic and relaxed. Built on a rocky precipice, there are only 12 thatched, spacious suites with terraces looking out to the ocean and the beach below. After drinks in one of the three elegant open pavilions, a five-course dinner is served every evening: particularly memorable is vanilla-flavoured crab, lobster ravioli and coconut cake with brown butter ice cream... oh, my! 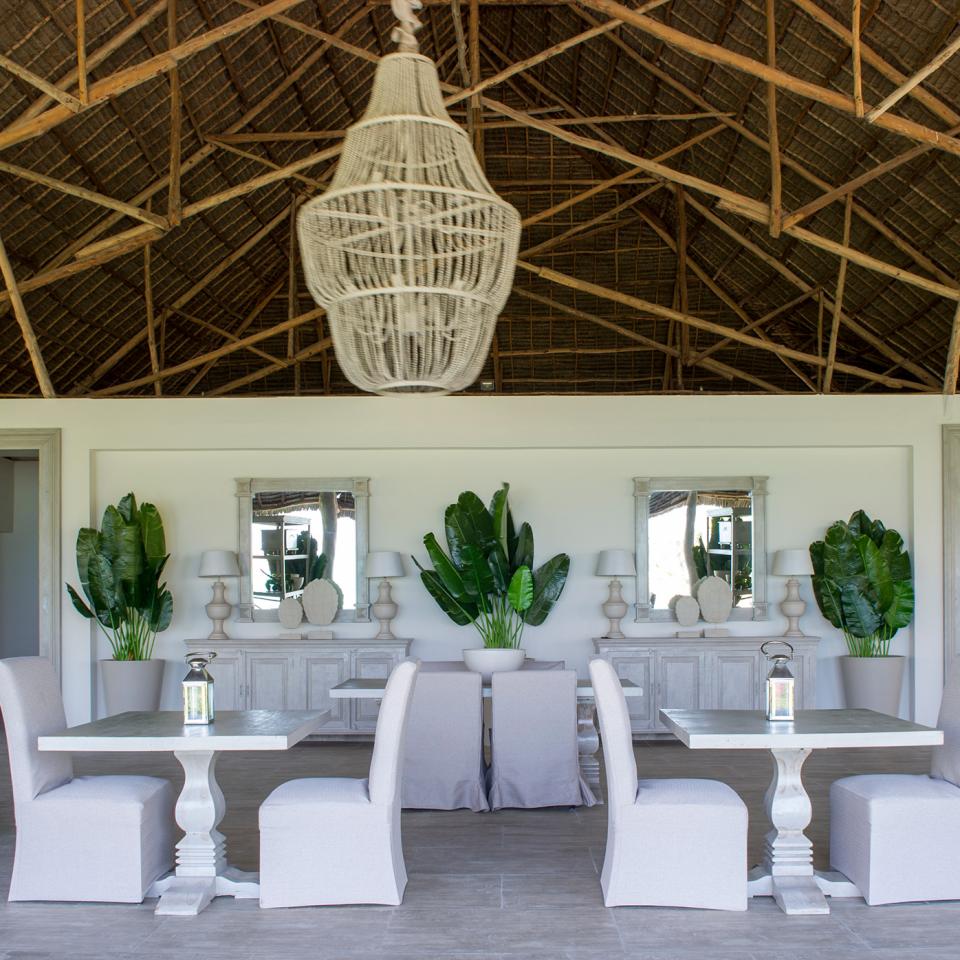 The chic ‘driftwood-inspired’ interior of the Zawadi Hotel

It’s the humble but versatile coconut which defines most Swahili dishes. At the exotic Baraza resort – sister hotel to the Zawadi – next door, the chef creates a simple chicken curry using a heady combination of familiar spices – cumin, coriander, chilli, turmeric – then dashing in coconut milk to give the sizzling dish a gentler, subtle edge. It’s traditionally eaten with mandazi – triangular chunks of dough made with yeast, flour, coconut milk and coriander which are then lightly fried: these have the taste and texture of a savoury doughnut, and are wonderful dipped into the curry sauce.

All too soon my culinary and cultural journey on this beautiful, fragrant and charismatic isle has come to an end, and as dawn breaks and fishermen’s dhows slowly make their way out beyond the coral reef, it’s time for me to leave. But while I feel sad to say goodbye, I know I will return. Indeed, I cannot wait to say ‘Jambo, Zanzibar!’ again.