From Russia with love: a food adventure

From former palaces, to humble homes, delicious food and drink is to be found in the former Soviet Union, says Lisa Harris 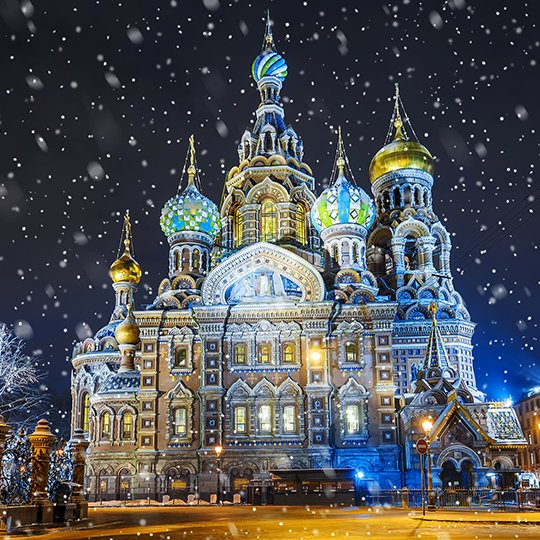 Handing over my passport, I felt a flutter of nerves. I’ve done a lot of travelling but never visited a country where I had so many preconceptions, and yet had absolutely no idea what to expect. The passport inspector gave a small smile and waved me through: I was in Russia, on an Intrepid Travel Real Food Adventure trip with eight others, and we were about to be thrown mouth-first into the world’s largest country.

Russia has 11 time zones and over 160 ethnic groups but, nearly three- quarters of the population live in urban areas, so our five-day trip kicked off in Moscow for two nights, followed by a quick train ride and overnight stay in the picturesque village of Suzdal, a Unesco World Heritage site before an internal flight to St Petersburg for the final two nights. I’m not always a fan of group travel; I like to explore independently, getting lost in a new city and following my nose to discover hidden gems. But our guide, Ksenia, uncovered culinary treasures I would never have found alone. 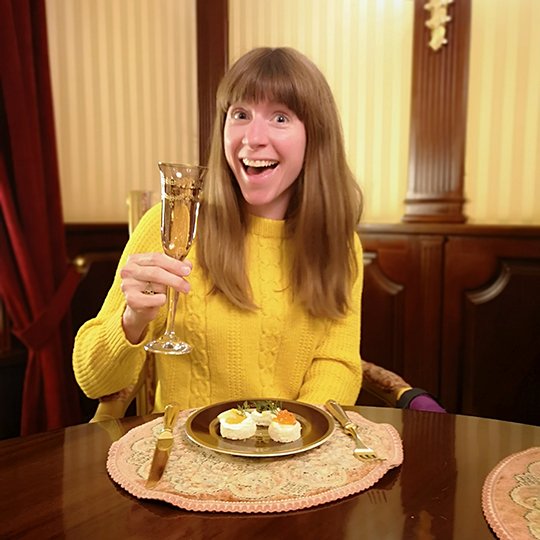 Every Intrepid trip includes visiting a family home; in Suzdal, Helen taught us how to make borscht and showed us around her vegetable garden. In St Petersburg, Olga cooked a lavish meal while her children sung us old revolution songs and then giggled their way through a rendition of the international kids’ song Baby Shark.

Eating and sharing home-cooked food with locals happy to answer our questions and share their family recipes, felt like we were getting a taste of authentic Russian cuisine. Ksenia also knew the best places to buy cream buns and obscure cheeses. At a market in St Petersburg, she introduced us to her favourite vegetable seller and helped us haggle for honey. Since I don’t speak Russian and I’m always happy to share my dinner, this type of holiday was the perfect introduction to a country through food.

Our first meal in Moscow was a tick-list of traditional dishes. Decked out like a babushka’s living room, restaurant Mari Vanna was a chintz-tastic explosion of lace and floral wallpaper. The table was laden with pickles, three types of dumplings, Pozharsky cutlets (a breaded chicken dish named after a Russian prince), eggs with red caviar, and forshmak herring pâté (a traditional Jewish dish) on toast – with a heavy dose of dill and parsley on everything. ‘Herring under fur coat’ was a highlight, with layers of pickled herring, grated boiled vegetables, mayonnaise and a pink layer of beetroot on top. 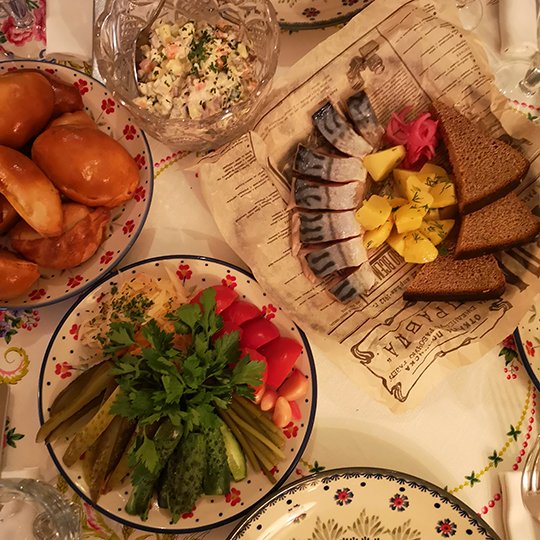 I hadn’t expected so many sharing dishes on the table, but Ksenia explained how sharing is a big part of Russian family meals. For dessert, we lingered over ‘bird’s milk’ cake, a milky marshmallow dessert covered in chocolate (so called because it is as difficult to make as bird’s milk), served with thyme-infused black tea. After dinner we took a tour through Moscow by night, strolling across the iconic Red Square, past the candy-coloured domes of St Basil’s Cathedral and imposing parliamentary buildings, and weaving our way through the cosmopolitan nightlife on the streets.

Moscow reminded me of Paris, but with a different alphabet. Wide boulevards, pristine streets, tree-lined promenades, and pastel yellow and green Art Nouveau buildings were more like the 2nd Arrondissement than the grey, industrialised post-Soviet capital I realised I’d been expecting. The city’s French influence comes from a long history of Franco-Russian alliance – and, in Russia, what we call Russian Salad is even known by its French name, Olivier Salad, after the chef who invented it in 1860s Moscow. Organising our holiday around different dishes, cuisines and ingredients gave us delicious insights into the culture. I became more aware of how old and new Russia – Soviet style and European influence – were layered on top of each other like the alternating cream and sponge layers in the famous honey cakes that adorned every bakery’s window.

It’s reductive to categorise all contemporary food in Russia as Western-influenced, because there’s a distinctively Russian touch to it: Moscow and St Petersburg are home to nature wine bars and small plate dining, like London or New York, but the wines come from neighbouring Georgia. Young chefs at St Petersburg’s Taste to Eat restaurant, for example, innovate wildly with traditionally Russian ingredients to create cabbage gazpacho, Baltic pikeperch with potato foam, or sea buckthorn meringues cooked in liquid nitrogen. The most exciting food we tasted on the trip had one foot firmly in each culture, and took the best of both. 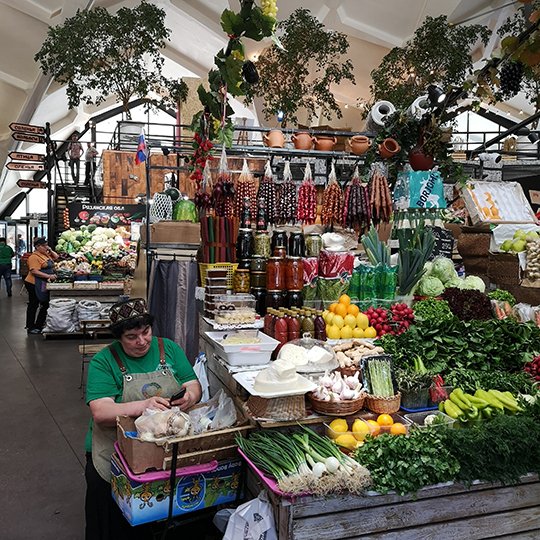 In St Petersburg winter temperatures sink to -10 degrees, so food entrepreneurs and artist collectives have reinvigorated abandoned palaces and mansions as indoor cultural spaces. In-between the ornate staircases and dusty chandeliers at St Petersburg’s Golitsyn Loft or Sleptsov Mansion we found Korean bibimbaps, a Georgian restaurant, Thai noodles, a chess club, coffee shops and tattoo parlours, as well as hip gin bars that wouldn’t be out of place in East London.

Peter the Great was a visionary leader who founded St Petersburg in 1703; he famously put a tax on men with beards in an attempt to modernise the country, so I’m not sure what he’d say about St Petersburg’s beardy hipsters today. Putin banned European food imports in 2014, which Russians initially responded to with consternation and panic-buying Brie. Five years later, and Russia now has a booming cheese market, with Russian-made ‘Parmesan’, ‘Roquefort’ and various goats’ cheeses. Savvy restaurants and shops still find a way to import via neighbouring countries or buy re-packaged EU goods to avoid the sanctions, but there is also a movement of Russian chefs who are proud to put local produce on their menus.

Necessity was the mother of invention for Russian preserves and jams too. Every meal on our trip was punctuated with a pickle, and in Suzdal we tried preserves including dandelion jam, pine cone-infused honey and pickled wild mushrooms. Ksenia explained how generations of savvy home cooks preserved summer’s bountiful fruits before the barren winters froze over, how herb and mushroom foraging is taught at schools, and that there’s a long tradition of herbal teas as home medicine, too. 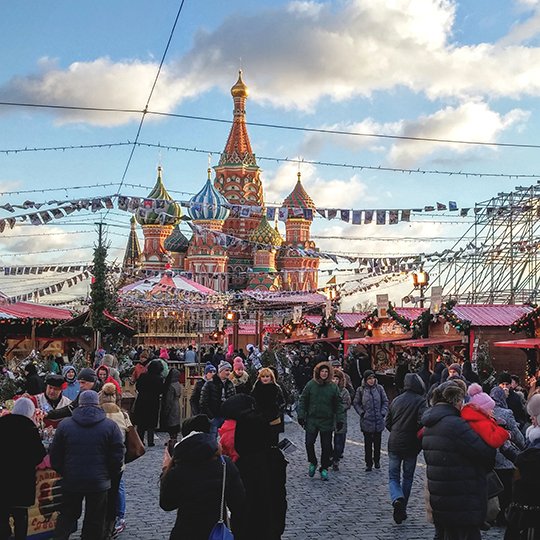 We took a food tour with Urban Adventures. Oksana, our enthusiastic local guide arrived with a red silk scarf wrapped around her head like a classic Russian doll. ‘These are the taste of my childhood,’ she said gleefully, as we all bit into crisp doughnuts and sipped condensed milk coffee before marching our way around local food markets, touring trendy coffee shops, and learning how to drink vodka (breathe out, then drink, and follow with a pickle).

At Eliseevsky – St Petersburg’s version of Fortnum & Mason – caviar, vodka, delicate pastries and even little chocolate Putin figures adorned the glass cabinets along the walls. Food is my personal obsession, but there was plenty for culture vultures too. I picked my jaw off the floor when I walked inside the impressive Church of the Saviour on the Spilled Blood: 7,500 square metres of handcrafted mosaics and precious stones line the walls of this church built on the spot where Alexander II was assassinated in 1881.

Ksenia told us it would take seven years to see every piece of art on show in the Winter Palace – I only had three hours, so I opted for a whistle-stop tour of the modern masters (Matisse, Picasso, Gauguin, Monet) and spent the rest of the afternoon gawping at the gem-encrusted chandeliers of the Hermitage. It felt like being inside Versailles, the British Museum and giant Fabergé egg all at once. This trip was an amuse-bouche; an introduction to the rich and varied food culture of Russia. I got a taste for the sharp pickles, the sweet cakes and the satisfying dumplings, and I’m already looking forward to a return trip for second helpings. 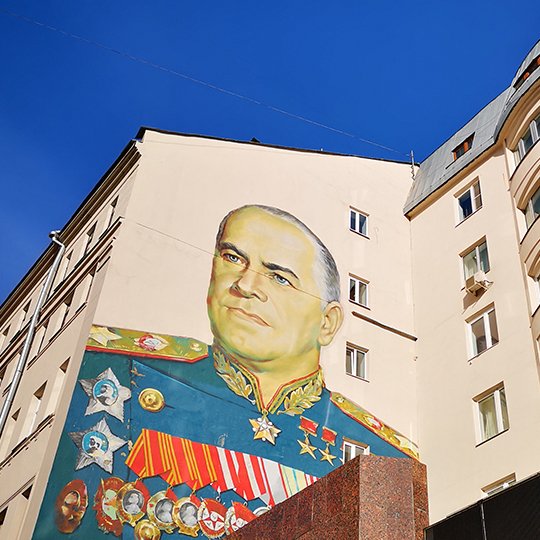 Buckwheat porridge: With hot milk and jam for breakfast

Pozharsky cutlets: Somewhere between a croquette and a kiev, these breaded chicken cutlets were a favourite of Pushkin, the Russian poet.

Intrepid Travel’s 10-day Russia Real Food Adventure is from £1,520 each. Accommodation, ground transport and most meals are included but not international flights. Visit intrepidtravel.com.