Hoping to impress your Valentine with a romantic dinner tomorrow but still have no idea what to make? Relax - this Italian menu by one of our favourite chefs Theo Randall is sure to leave your loved one weak at the knees (and score you some serious Brownie points). A sharing antipasti platter to start, followed by a scallop taglierini and a creamy panna cotta... we're swooning at the mere thought of it. Enjoy with a bottle of chilled Champagne. How will you be celebrating Valentine's Day? Tell us in the comments box below. 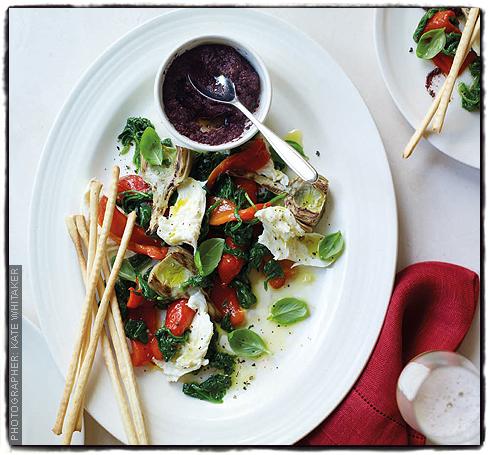 2 Once the peppers are cool, scrape away and discard the charred skins and remove the seeds. Avoid washing them as this dilutes their flavour. Slice the peppers into strips.

3 Put the pepper strips in a bowl with the garlic paste. Marinate for 10 minutes, then add ½ tablespoon of the oil. Tear half the basil leaves and add them to the peppers. Set aside.

4 Meanwhile, blanch the spinach in boiling water for 20 seconds; drain in a colander. Once the spinach has cooled, lightly squeeze it to remove any excess liquid, then season and add the remaining ½ tablespoon of oil.

5 To make the olive sauce, blitz the olives in a food processor with the lemon juice, the remaining basil leaves and some seasoning for 30 seconds. Add the olive oil and blitz for a further 5 seconds. Transfer the sauce to a small dish.

6 Drain the mozzarella, then tear or slice it and arrange on a platter with the dressed spinach, marinated peppers and artichokes. Serve with the olive sauce and grissini. 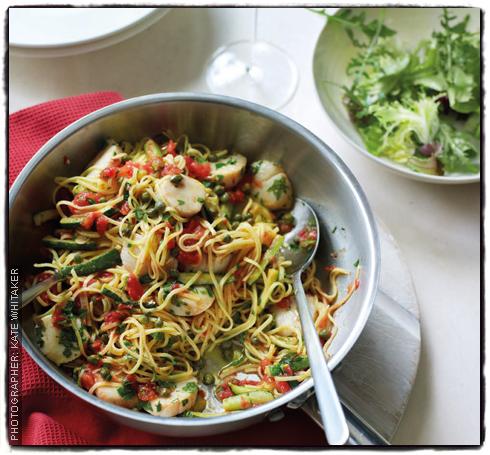 Serve with a leafy green salad.

1 Cut the courgettes into quarters lengthways. Heat the oil in a large heavy-based frying pan. Add the courgettes and cook over a medium heat for 10 minutes until they're
a light golden colour – this gives them more flavour.

2 Add the garlic and scallops, increase the heat and fry for 2 minutes until they're a creamy-white colour. Stir in the tomatoes, capers and parsley. Season and remove from the heat.

3 Cook the taglierini in a large pan of boiling salted water according to the pack instructions.

4 Drain the pasta, reserving a couple of tablespoons of the cooking water. Mix the pasta with the sauce and add the reserved cooking water to loosen the mixture a little. Toss together and heat gently for a minute or so before serving. 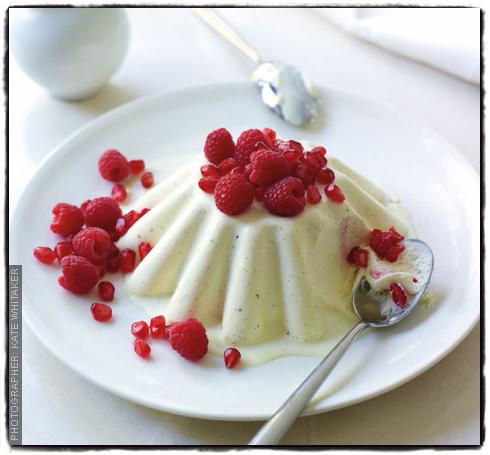 Panna cotta with raspberries and pomegranate

A fabulous make-ahead pud. Take a spoon each and dig in.

1 Heat 400ml of the cream to boiling point with the vanilla pod and lemon rind; simmer until the liquid has reduced by a third. Remove from the heat, pour into a large bowl and leave to cool over ice. Soak the gelatine in the milk for 10 minutes until soft, then remove the gelatine and reserve. Gently heat the milk until just below boiling point.

2 Return the softened gelatine to the milk and stir until dissolved. Add the milk to the cream, vanilla and lemon mixture and stir to combine. Strain into a bowl to remove the lemon zest and vanilla pod. Cool, whisking every 5 minutes to prevent it from going lumpy.

3 Whip the remaining 200ml of cream in a bowl with the icing sugar. Once the lemony cream has cooled and is the consistency of double cream, fold in the whipped cream.

4 Pour the mixture into a lightly oiled 600-750ml fluted jelly or dessert mould, cover and leave the panna cotta to set in the fridge for at least 3 hours.

5 To serve the panna cotta, immerse the mould in a bowl of boiling water for 5-10 seconds, then invert on to a plate. Scatter with raspberries and pomegranate seeds.