4th October is Cinnamon Bun Day - a day celebrated by Scandi bakeries and restaurants all firing up the ovens to bake batches of delicious spiced buns for neighbours and guests. If you've never tasted an authentic Scandinavian cinnamon bun before, don't expect them to be anything like the American version. These ones are less sticky and sickly sweet, with a hint of cardamom and a golden brown glazed surface.

We were lucky enough to be invited down to the Nordic Bakery in Dorset Street to learn how to make proper Finnish cinnamon buns. Miisa Mink, author of the Nordic Bakery Cookbook, explained that each Scandi country has its own variation on the cinnamon bun; Finnish buns are spiced, glazed and crunchy on the outside.

The basic dough mix is called 'pulla' and this mixture is the starting point for lots of Finnish baking. She said that her mother would always have a 'pulla' on the go to turn into cinnamon buns, Pulla bread and Boston cake.

This is the recipe that Francis (head baker at the Dorset Street branch) follows daily. Have a go at making them this Sunday and let us know how you get on... 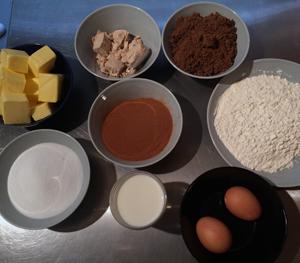 All set with the ingredients...

1. To make the dough, put the milk, sugar, yeast, cardamom, melted butter and egg in a food processor or mixer with a dough hook. With the motor running, gradually add the flour until it is all incorporated and the dough has come together.
2. Transfer the dough to a bowl, cover with a clean tea towel and leave to prove in a warm place for 1 hour, or until it has doubled in size. 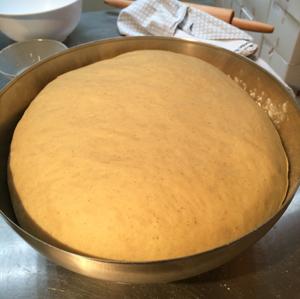 3. After 1 hour, punch down the dough and transfer onto a lightly floured surface. Using a rolling pin, roll it out until it is about 30x80cm and 7mm thick.
4. For the filling, spread the butter evenly over the dough and sprinkle the sugar and cinnamon all over the top. 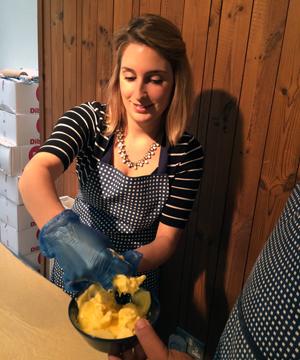 Sarah getting involved with buttering the dough

5. Preheat oven to 200°C, fan 220°C, gas 6. Roll the dough up from the long side. Cut into roughly 6cm rolls, but cut them at an angle – so, make the first cut diagonally, and then the second cut about 6cm along diagonally in the opposite direction. You should get a roll that looks like a trapezium (or a triangle with the tip chopped off). Carefully transfer the buns to two baking trays, lined with greaseproof paper, with the longest edge of the bun sitting on the tray. Cover with tea towels again and leave to prove in a warm place, until almost doubled in size.
6. Bake the buns in the preheated oven for 20-25mins or until golden brown.
7. To make the glaze, put the sugar, lemon juice and 100ml water in a small saucepan and bring to the boil. Simmer for 5-10mins, until slightly thickened. The glaze will still be quite watery.
8. Remove the buns from the oven, transfer onto a wire rack and brush the glaze generously over them. Leave to cool before serving. 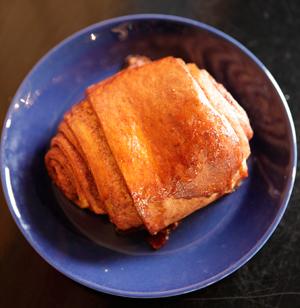