World-renowned chef Magnus Nilsson runs Faviken restaurant in a remote part of Sweden, currently ranked number 25 in the world. His new book (all 700 pages of it) is dedicated to exploring Nordic cuisine in depth. There's much, much more to it than pickled herring and meatballs, as he told us when we spoke to him on his much-anticipated visit to the UK...

Are you excited by the trend towards Nordic cuisine?

Yes and hopefully people will discover more of it. If you look at the dishes people know, it's very limited; herring, gravadlax and meatballs. I think that's because Nordic cuisine is a bit inaccessible. You can have a meal at a restaurant in southern Spain and the chance is that it will be quite representative of what people eat at home. You can't do that in Nordic cuisine because restaurants don't reflect traditional Nordic cooking.

Where in Sweden are you from and what is its speciality?

I'm from a region that's a six-hour drive north of Stockholm. Traditionally people didn't make loaves of bread up there, they made flatbreads from barley flour because wheat didn't grow that far north. I like to have them with a little smear of butter and a few shavings of mature hard cheese.

What kind of dish would you cook at home at this time of year?

Moose hunting season has been on for a month and there are lots of game birds that haven't flown south yet, so I'd make a game stew.

What is your favourite raw ingredient to cook with?

I like cooking vegetables. Vegetables are often what define a dish. Lets say we have a dish of chicken and broccoli and you substitute chicken for veal - which is another light meat - you're going to have essentially the same dish, it will pair with the same wine. But if you exchange the broccoli for carrot, you have a different dish.

People often group Nordic cooking together, but what is typically Swedish?

Sweden is a pretty big country. From north to south it's as different as the UK and Belgium, so it's not easy to sum it up in one way. As a whole, Sweden has four defined seasons and at least one of them is when you can't harvest fresh vegetables or produce. This means you have to produce more in summer to preserve. Even though today you can transport things everywhere, preserving is still important as an underlying factor shaping the culture of food and eating in Nordic cuisine. 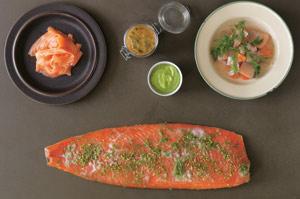 What three ingredients does a UK home cook need to cook Nordic food?

In many ways the UK has a similar climate to large parts of the Nordic region, especially the Scandinavian parts. UK winters are a little milder and the summers are a bit longer but we have similar produce (apart from obscure things like puffins). Iconic staples are herring, rye-based breads and very good dairy produce like milk, butter and cheese.

I like classic pickled herring. You pickle it in vinegar, onion, carrot, cloves and bay leaves and serve it with boiled potatoes, a little bit of crispy rye bread, butter and cheese.

What would be your perfect day of food?

I like rice porridge for breakfast, but I really only eat it at Christmas. A Danish open sandwich for lunch with eel or scrambled eggs on rye bread. Dinner would be something from my childhood. In the book there's a recipe for chicken, banana and peanut casserole. It sounds weird but it's disturbingly delicious.

What do you eat at Christmas?

In Sweden we have a 'julbord', which is like a giant smorgasbord. It has herring, salmon, charcuterie and lots of warm dishes. We also have sweet bakes like saffron buns and ginger snaps.

What would you expect to find in a Nordic bakery?

I think any Nordic bakery should have soft-crusted breads like sweet loaves, tea-cakes and buns.